From Wired (from Vanity Fair):


[T]he most interesting thing VF got from the director is his choice for his favorite Star Wars character: Jar Jar Binks. In bringing up the most widely disliked character in the galaxy far, far away, Lucas was likely defending his past creations. But the choice also touches on why Lucas seems to have stepped away from helming Star Wars movies: freedom from one’s creations. “You go to make a movie and all you do is get criticized and people try to make decisions about what you’re going to do before you do it,” Lucas says. “It’s not much fun, and you can’t experiment … I don’t like that.”

Meesa no souprised. George Lucas didn't mind taking chances with Star Wars, either in tinkering with the originals or making a clownish CGI character a central figure in the first of the prequels. The same spirit that drives the Advanced to be so amazing when they are young drives them to be so confounding when they mature. It's a package deal: you have to take your Wookies with your Gungans. 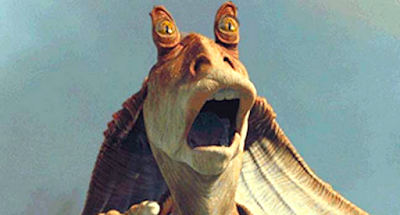 Prince to Tour With Piano and Microphone


[Prince will] be forgoing his guitar in favor of a more intimate piano for a just-announced, globe-spanning new tour. The Prince Spotlight: Piano & A Microphone Tour — which is rumored to make stops in a dozen countries in less than a month — will feature solo Prince performances where he only wields (you guessed it) a piano and a microphone. “Why do this now? For several reasons. For starters it is a challenge,” he told Cultura, who broke the news. “I rarely get bad reviews because this is something that’s been perfected for over thirty years. You have to try new things. With the piano it is more naked, more pure. You can see exactly what you get.”

As a fan of his guitar playing, I hate this. As a believer in Advancement, I love this. Then again, if his piano looks like this (below), everything will probably be okay. 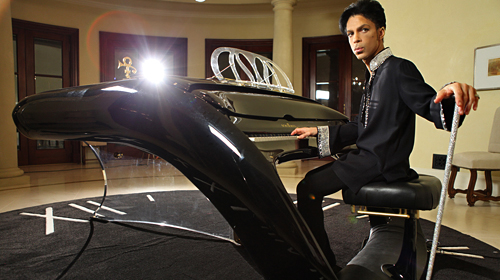 Posted by Advanced Genius Theory at 11:12 AM 3 comments

Email ThisBlogThis!Share to TwitterShare to FacebookShare to Pinterest
Labels: Prince

Take it away, NME:


Numan admitted in an interview with Bang Showbiz that the technology of modern electronic music still fascinates him, but emphasized that he's largely doing his own thing these days, and doesn't really relate to the modern style. The 'Cars' and 'Are 'Friends' Electric?' man said: "I don't really care [about Electronic music] to be honest. I just look after myself. I do my own thing and make sure I am doing what I want to do and the rest of it does what it likes. I'm not a flag waving champion for electronic music.''

I'd really like to see him take up folk music, personally. Or maybe dixieland. 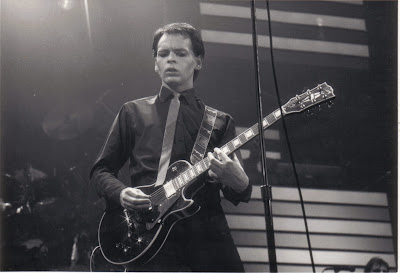 Danzig Covers the Everly Brothers, ZZ Top, and Others

This is really my kind of thing, let me tell you:

"These are my skeletons," Danzig said in a statement. "You may or may not know that I dig these songs. You could say that some of this music is the actual basis and skeleton of what I listened to growing up – ultimately informing the kind of music I like. It's the foundation. If you took Elvis and Sabbath out of my life, I probably wouldn't be the Glenn Danzig you know! I'm glad both sides are represented on this record."

It's always interesting to know what influenced artists whose output is pretty narrowly defined within a genre. When you first hear someone like Danzig and you're, say, 12, it's hard to imagine him sitting around listening to Fleetwood Mac or Leo Sayer, but when you get older you realize he probably knows at least the first verse of "You Make Me Feel Like Dancing."

Anyway, my favorite choices on this record are "Crying in the Rain" by the Everly Brothers and, even better, "Rough Boy" by ZZ Top. The album cover is pretty awesome, too (see below). Posted by Advanced Genius Theory at 9:19 AM 0 comments

Great interview at the New Statesman. Here are some good bits:


“Oh my God, I can’t believe you thought I was a socialist,” he says now. “I was nothing more than an opportunist. Any socialist tendencies I may have had were cured when I got my first tax bill. All artists are socialists until they see another artist with a bigger house than theirs.”


“The good news is, most record company people are motivated by the same reason most of us are: greed,” he says. “So, no, when you look back at it, it didn’t make much sense for management not to want my second record to succeed.”

Thought he does add that Michael Jackson saw him as a threat and held "more power than the Pope." He says that Lenny Kravitz was a sort of replacement for him and says of the video of Kravitz's penis (with cock ring) coming out in a concert:


“Choreographed for sure. The only thing I could think to do with a cock ring now is keep my house keys on it.”

I recommend reading the whole thing. I'm not going to say that he is Advanced, but it's really interesting how he goes from being very realistic and pragmatic to neither (e.g., he says "angels named him Sananda" but that he needed a second name because he didn't want to "piss off" Madonna"). His new project is a concept album (double, of course), with songs like "Giraffe" (sample lyric: "Giraffe/can I have your autograph?/Please sign it to Sananda"), which was inspired by songs from Sesame Street and other children's music. Like I said, read the whole thing. Also please note what he is wearing in the photograph below.

Posted by Advanced Genius Theory at 9:39 AM 0 comments

Pitchfork has the story:


[T]he covers of "Blank Space" and "Welcome to New York" came together over the span of "like, an hour", when he passed by his tour manager's office and found her listening to Adams' 1989. Tillman says that he never heard Swift's originals prior to that day (although he concedes, "I’m sure I’ve been walking by a Cinnabon or something at the airport and heard it"). To record the new versions, he referred to a printout of Swift's lyrics.

After he uploaded the covers, Tillman became surprised by their immense popularity. "By the time I got back to the bus that night," he recalls, "my TM [tour manager] was like, 'It’s the top trend on Facebook! It’s on USA Today!', and I was like, 'this is ridiculous,' so I went and took them down, thinking, 'now that’s over'."

Except it wasn't. Media outlets (including this one) began reaching out asking why he took down the covers. Even Taylor Swift's camp got in touch to ask why they came down and encouraged him to put them back up.

So Tillman decided to troll everyone by issuing a statement that Lou Reed came to him in a dream and asked him to take down the covers. "I was annoyed at the media," he explained. "I was like, 'these people will print anything', so I went and gave them the most fraudulent, the most blatantly absurd, unprintable piece of surrealistic nonsense – and they printed it!"

I guess he thinks the people who printed that thought it was something other than surrealistic nonsense but I can assure him that was not the case. It must be interesting to live in a world where you assume people are so dumb. Anyway, this is pure Overtness all around: capitalizes on someone else's really good idea, gets embarrassed about it, tries to be clever/weird, and then finally can't just let that be the last of it because he's worried people might have thought he was serious, which really would have been better than recanting. Poor form, sir!

Posted by Advanced Genius Theory at 9:13 AM 2 comments

The Best Version of Walk on the Wild Side: Gerty Molzen

It's by this lady, Gerty Molzen: 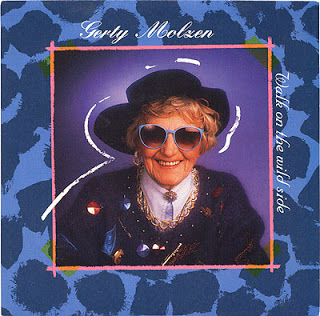 Don't  know why I thought of it today, but I learned about it on Dave, long ago...