Bob Dylan to do GPS Voice

[Bob Dylan] said on a recent broadcast of his radio show that he may lend his distinctively gravelly voice to a satellite navigation system for cars, Agence France-Presse reported. In the latest edition of his “Theme Time Radio Hour” program, Mr. Dylan said, “I’m talking to a couple of car companies about being the voice of their GPS system,” according to Agence France-Presse.

That GPS should come with the Cadillac that Dylan promoted. And it should be pre-loaded with Victoria's Secret locations.
Posted by Advanced Genius Theory at 1:34 PM 2 comments

Email ThisBlogThis!Share to TwitterShare to FacebookShare to Pinterest
Labels: bob dylan, Selling Out 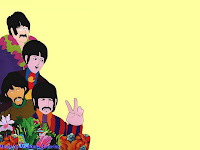 Robert Zemeckis is in negotiations to direct a remake of the 1968 animated Beatles feature "Yellow Submarine" for the Walt Disney Studios Disney had no comment on the deal. Still being sorted out is the acquisition of rights to the film's music, which includes the title track as well as "Eleanor Rigby," "Lucy in the Sky With Diamonds," "When I'm Sixty-Four" and "With a Little Help From My Friends."

Apparently he's going to use the animation style we saw in Polar Express. I've got to admit that even I have reservations about this one. Prove me wrong, Robert!
Posted by Advanced Genius Theory at 10:37 PM 1 comments

Email ThisBlogThis!Share to TwitterShare to FacebookShare to Pinterest
Labels: reworking, the beatles 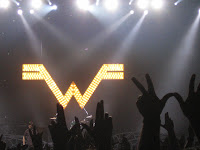 I don't like Weezer much, but I do like the name of their new album: Raditude. Might have to give that one a listen.
Posted by Advanced Genius Theory at 9:50 PM 0 comments

Another good story for Saturday (NME):

Sonic Youth are set to appear in an upcoming episode of the popular US television programme 'Gossip Girl'.

The veteran rockers are reportedly fans of the show, and guitarist Thurston Moore recorded a cover of the Ramones' 'Sheena Is A Punk Rocker' for inclusion in a previous episode.

Now the band are set to perform an acoustic version of their 1986 single 'Starpower' on the fifth episode of the upcoming fall season, reports Entertainment Weekly.

Bob Dylan: I and ID

A teacher friend pointed me in this story's direction:

A 24-year-old police officer apparently was unaware of who [Bob] Dylan is and asked him for identification, Long Branch business administrator Howard Woolley said Friday. “I don’t think she was familiar with his entire body of work,” Woolley said.

The incident began at 5 p.m. when a resident said a man was wandering around a low-income, predominantly minority neighborhood several blocks from the oceanfront looking at houses.

The police officer drove up to Dylan, who was wearing a blue jacket, and asked him his name. According to Woolley, the following exchange ensued:

“What is your name, sir?” the officer asked.

“OK, what are you doing here?” the officer asked.

“I’m on tour,” the singer replied.

A second officer, also in his 20s, responded to assist the first officer. He, too, apparently was unfamiliar with Dylan, Woolley said.

The officers asked Dylan for identification. The singer of such classics as “Like a Rolling Stone” and “Blowin’ in the Wind” said that he didn’t have any ID with him, that he was just walking around looking at houses to pass some time before that night’s show.

The officers asked Dylan, 68, to accompany them back to the Ocean Place Resort and Spa, where the performers were staying. Once there, tour staff vouched for Dylan.

The officers thanked him for his cooperation.

“He couldn’t have been any nicer to them,” Woolley added.

Meanwhile Cate Blanchett was in Patterson, NJ, robbing a bar and grill. 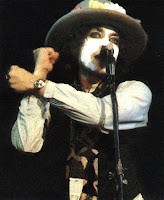 This should be good (Reuters):

Bob Dylan is set to release an album of Christmas songs, including "Here Comes Santa Claus" and the carol "O Little Town of Bethlehem," according to music websites.

Rumours of the album first emerged on Isis magazine website, which is devoted to Dylan. It later reported the songs had been recorded in Jackson Browne's studio in Santa Monica, California, in May.

David Hidalgo of Los Lobos, who played accordion on Dylan's chart-topping latest album "Together Through Life," is one of the musicians who took part in the sessions, it said.

"It is a personal project of Dylan himself rather than an idea put forward by his record company," Isis said.

Billboard magazine said it had confirmed the album existed. Other songs included "Must Be Santa" and "I'll be Home for Christmas," it said.

Dylan was originally of the Jewish faith and was a Born Again Christian from 1979-1981, releasing three religious-themed albums.

"At first glance it may sound bizarre, but I don't think Dylan cares much about what his detractors might make of it," Scott Marshall, who has written a book 'God and Bob Dylan: A Spiritual Life' told bullypulpit.com.

"He's both never renounced being Jewish or renounced his experience with Jesus some three decades ago," Marshall said.

This is classic Advancement on a number of levels. Being religious is Advanced, as is liking Christmas (especially if you're Jewish), but recording a Christmas record after releasing three critically acclaimed albums in a row and doing it at Jackson Browne's studio with a member of Los Lobos is amazing. This record is also an example of an Advanced musician managing to do something unexpected that is also not the opposite of what is expected. By now I thought I had a handle on Dylan, but a Christmas album is surpising, but exactly why that is I can't say, nor can I say why he would want to do one.