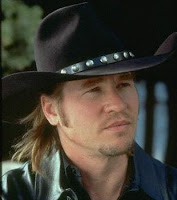 SO, as we speak, guess who's gearing up for political office?

By cellphone from Bulgaria, he said: "There's sort of a rumor around that I'm maybe thinking about running to be governor of New Mexico? Well, it's sort of true. It's been my home 25 years. I really love my state. Poor, hardworking, decent people - Native Americans, carpenters, artists, expats mixed in with hundreds of the world's smartest physicists at Los Alamos. I've always thought of myself as functioning as a candidate for them.

"The media interests me and it's influenced politicians since the '60s, and I'm approaching this as a worthy serious endeavor. I would be very comfortable in my position as a representative for the people."

Val Kilmer? Who was the lead in "Batman Forever"? Moses in "The Prince of Egypt"? Druggy rocker Jim Morrison in "The Doors"? Ladykiller Val Kilmer? Governor of New Mexico?

"People in the state are being supportive. Our current governor, Bill Richardson, who's hoping to be picked as secretary of state, and whom I've seen down in the dirt helping people you know could never help him in return, and whom I love, had a dinner for me and said not to dismiss the idea. Said I could be a great governor.

"Right now I'm making a movie here. I won't say it's a remake of Hitchcock's '59 oldie 'North by Northwest' because that sounds awful. Let's say it's inspired by that film. Similar plot, espionage, mistaken ID," and here he laughed, "and I'm doing Cary Grant's part which, I guess, is like saying I'm doing a sculpture of the Statue of Liberty.

Needless to say, I'd be happy to endorse him.
Posted by Advanced Genius Theory at 11:23 AM

I just want to know why Val Kilmer was in Bulgaria!

On an unrelated note: Sigur Ros seems to have brought overtness to advancement. They now sport a horn section and backup singers, but the horn section is dressed in white suits and bowler hats and the backup singers are dressed like Kate Bush.

Let me just say, a few weeks ago I was at the bank and CNN was on their TV, when none other than Gene Simmons was a correspondent talking about the economy. His message was that the American people are resilient and we've gotten through tough times before, and that we'll prevail again. The best part though? In the area at the bottom of the screen where it says who he is, it said "Gene Simmons: Rock Legend"

if you dont already know....

A live follow-up to Metal Machine Music. Can you dig it?


I know you are writing a book, but come on Jase! Where the heck are you?

Help all of the disciples out!!!

Jason, where are you? I know I haven't posted much in 3-4 months either, but have started to get moving again. Did you give up the ghost?

I invite you to listen to my music:

I guess the church of advancement is closed for business, it's rectors retired. I for one am HIGHLY dissapointed!

Cool blog you got here. I'd like to read more about this topic. Thanx for sharing that material.
Sexy Lady
UK escort