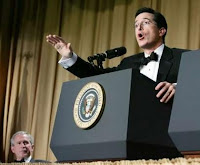 Got a note from Kathy, who asks:


Do you think Stephen Colbert is an Advanced Genius or merely a genius? He is a best-selling author, Emmy and Peabody award winner, has his own virtual country (the Colbert Nation) and his own TV show. Yet his recent appearance before Congress has caused many people to ask "What was he thinking?" Others have said he was making a mockery of Congress. And this is a man who has:

a) Skewered President George W. Bush TO HIS FACE at the White House Correspondents Dinner in 2006;

b) Made the cover of SPORTS ILLUSTRATED as a "member" of the U.S. speedskating team at the Vancouver Olympics;

c) Had a treadmill in the new wing at the International Space Station named for him;

d) Had his head shaved by General Ray Odierno while entertaining US troops in Iraq.

Need I say more? Has this man raised satire to heights never seen before or what? I rest my case.

At first I sort of dismissed the idea that Colbert could be Advanced. Great, sure, but Advanced? Then I started to think: he was a part of the brilliant Dana Carvey show, which was underappreciated and misunderstood. He has been doing great stuff for 15 years. He was Tea Party (if satirically) before the movement began, so he was ahead of his time. He is religious. He has embraced technology (see space treadmill). And he went solo, leaving The Daily Show for his own program. These are all good things. The only issue is that everyone respects him, or at least all of his original fans,who are the ones that must be betrayed.

I will say that his counter rally to the Stewart Rally to Restore Sanity could be seen as an almost Ralph Nader-like undercutting of what could actually create serious conversation about whether we have all gone crazy. I kind of wish he weren't doing it, so that's kind of promising. But really, he's yet to make his base mad and no one would argue that he has lost it.

I think that if anything he is an Advanced Irritant for the reasons Kathy listed above. He went in front of the President of the United States and showed him no more respect than the comedians showed Chevy Chase at his celebrity roast on Comedy Central. Jon Stewart accused "Crossfire" of hurting America, but he wasn't in the same room with them, as I remember, and regardless, those guys were clowns.

His latest appearance in front of Congress was arguably even better because he was there for a serious cause that he really believed in, and yet he stayed more or less in character the whole time. For people who think James Franco is doing some chancy stuff, let's seem him be "James Franco" during a hearing in front of a judiciary subcommittee.

If he wants to Advance, he can, but until then, he'll just be the second funniest guy from South Carolina currently working today.
Posted by Advanced Genius Theory at 12:58 PM

Actually, Jon DID tell Crossfire that they were hurting America to their face:
http://www.youtube.com/watch?v=aFQFB5YpDZE

What's even better is that they were taken off the air shortly after.

I thought for sure he was being interviewed by satellite, but I guess not. Thanks for sending!

TechSavvyLB said...
This comment has been removed by the author.
12:42 AM

So why doesn't satire automatically violate the mandate against irony? It doesn't seem fair that a satirist can't Advance, as I'm sure at least a few have. But if Colbert's whole character is tongue-in-cheek, isn't that Overt? Wait . . . did I just answer my own question? Does he have to move beyond the satire before he can Advance?

Colbert's performance right to Bush's face is all I need to know that he mostly certainly is advanced (and has balls of steel). Recall in those dark days that all photo opps with Bush were well guarded phony affairs with audience filled with GOP plants. It wasn't just horrible what the president was doing, it was insanity that none of us were permitted to tell him so. You were "fer or against" the US. You would be mocked as unpatriotic. (ask Bill Maher). The media was "embedded" with the military, making reports from them practically useless. They established "free speech zones", conveniently file miles away from where the president was speaking. On and on it went. Colbert, on the other hand, hand the gumption to go right into the lion's den and tell that president off to his face. Even more hilarious is the idea that some Bush lackey who scheduled Colbert must have thought that Colbert was a real Republican (this is mistake was made many times in the early days by more than one politician). I give Colbert major props for doing what no one else, anywhere, except maybe the show thrower, had the nerve to do. Everything else he does is just gravy. (and that gravy can be similarly wonderful at times)