Waterloo Sunset vs. Breakfast in America 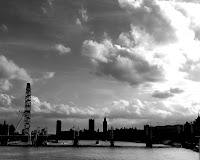 Getting back to blogging has been difficult because I can never find anything good about the world of Advancement. Or maybe it's harder to get interested these days. But whatever, it's hard. So here's just a thought:

Since moving back to Atlanta a couple of years ago, I've had to get used to listening to the radio again because I don't have anything to play iPods in my stereo and I can't seem to make enough CDs to keep myself happy. Anyway, I've just heard "The Logical Song" by Supertramp for the eight-millionth time on our classic-rock song and I just want to know why you never hear "Waterloo Sunset" on the radio. The Kinks have tons of radio-friendly music, but I can give that a pass. But what on earth prevents a DJ from putting on such a great song? If I were to request it, would the average classic-rock station even have it?
Posted by Advanced Genius Theory at 3:00 PM

Email ThisBlogThis!Share to TwitterShare to FacebookShare to Pinterest
Labels: radio, supertramp, The Kinks

My best guess would be that it's too sentimental and not masculine enough for a classic rock station, especially a southern one.

I think it also has something to do with the strong British identity of the song. With the "Waterloo", taxis, millions of people and the river, there's no taking London out of that song. I would bet very few classic rock listeners in the area have been to London or are all that interested. However, I can easily imagine a Beach Boys song about California being played since that's a culture that listeners would be more familiar with and therefore interested in.

Maybe I'm not giving the audience enough credit, but putting yourself in the perspective of a Londoner reminiscing about the city may be too much of a leap. Something like Brown Eyed Girl by Van Morrison is sentimental but I think innocent love is such a universal theme that you can easily understand it on a very basic level or appreciate the lyricism on another level. With Waterloo Sunset that perspective is a little harder to get into for a casual listener.

Another problem: In America, The Kinks are perceived as garage rockers in the accepted narrative of 60's music. You would probably never hear White Light/White Heat-era VU, Scott Walker or Waterloo Sunset because they have somehow been erased from the musical map.

Those are things that might prevent someone from loving that song, but I honestly can't account for why it doesn't get played, just why it might not be very popular. Even on a nostalgia station, what's to stop someone from listening to an old song that's new to them and enjoying it?

Not sure all is quiet in the world of advancement, though. Michael Jackson died. Maybe he was just 'weird' as opposed to advanced. But I'd love to hear your thoughts on the matter....

great answer Mark! As for MJ, I've been thinking quite a bit about him and will write something soon.

Team J is Jason, by the way.