Kraftwerk Get Some Help From Olympic Cyclists 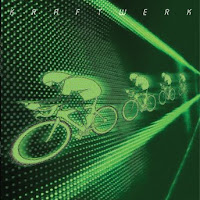 Kraftwerk found a way to spice up their live show a bit that I find quite Advanced:

The German godfathers of electronica played a two-hour set to open the Manchester International Festival. They were joined by Ed Clancy, Jason Kenny, Jamie Staff and Geraint Thomas - who all triumphed in Beijing in 2008.

The quartet appeared from behind the band to ride in a wave formation during Kraftwerk's song Tour De France. The cyclists' names were announced from the stage with a thick German accent a couple of minutes into the song, much to the delight of the crowd. The wave formation was then mirrored by elaborate visual effects on screens behind the stage.
Most of the audience agreed the appearance was the highlight of the show. "I think I died and went to heaven when the cyclists came out for Tour De France. That's the best track and action I've ever seen working together - it's my gig of the year," said one enthusiastic fan.

I like that in the mind of this fan, heaven is a Kraftwerk concert that features four guys on bicycles. Oh and that in heaven you get to see the best gig of the year, not the best gig ever.
Posted by Advanced Genius Theory at 4:07 PM

Do you think Microsoft is Advanced?

I've thought about that, and I think the answer is No.

Gates would never sport black leather, dark glasses, and long hair in the back.

Yes, and Microsoft is always behind the times, not ahead of them. However, BG is friends with Bono...

Nothing to do with Kraftwerk (I don't know how to contact you witout leaving a comment on a post), but I was wondering if you had seen the interview of Michael Jackson with Martin Bashir of MSNBC. My gut says that this interview is advanced in someway. I am currently reading all of your back-blogs to understand it more (your thoughts are pretty genius actually).

Since I never trust copying and pasting youtube links, just search "Living with Michael Jackson" in youtube. Parts 9 and 10 are by far the most insightful.

From there hopefully you can see most of the interview before NBC decides to take it down. Anyways, I hope to see a book (apparently in the works) about this theory sooner or later.

Keep up the good work of making music geeks like me rethink their entire perspective on life.

I wrote about Michael Jackson some in my book, and of course now I'll do some revising because now that he's dead, he's suddenly a genius again! But the general thought is that he is artistically Advanced, but his evident mental illness limited his Advancement. Now that it appears that he was taking a lot of pills, that would also explain why his Advancement was stunted. The Advanced start out on drugs, but must clean up before full Advancement is achieved.