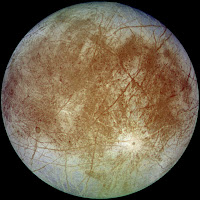 The announcement three months ago that Europa, one of the moons of Jupiter, has the potential of producing nearly two years' worth of oil created quite a buzz in the energy industry. And last night, Ted Stevens, CEO of a consortium of oil companies called NewEnergy, announced that it, along with General Motors, has devised a way to get the oil safely and cheaply. Soon after the oil was discovered, Exxon, Shell, and British Petroleum pooled their research and development teams to find an efficient means of getting to Jupiter, putting in place drilling equipment, extracting the oil, and getting it back to Earth. "We knew it would be too expensive to launch a traditional rocket because the payload would be so great," said Piet Balkenende, the leader of the Shell team. "So we modified an engine that would not only launch the rocket, but power the vehicles and drilling equipment." This engine, called the Bunny (after the popular mascot for Energizer batteries), is similar to a regular combustion engine, but instead of liquid fuel, it uses a battery only slightly more powerful than an ordinary nine-volt. The rechargeable battery can power the engine of the moon vehicle for six years or more with just one charge.

According to Mr. Balkenende, this technology is not entirely new. "Since 1968, we'd had a working prototype that powered a vehicle we called the Batt-Mobile [an allusion to the Batmobile from TV's Batman], but we just didn't have a commercial use for it. So it just sat around our facility gathering dust." After the oil was discovered on Europa, that changed. "One of our technicians was thinking about the launch problem when he decided to take the Batt-Mobile out for a spin to relax his mind," explained Mr. Balkenende. "After riding around for a bit, he asked a technician when the battery had last been charged. When he discovered that it hadn't been charged for nearly 40 years, he thought maybe he had found a solution to our problem." Still, even with the Bunny, the necessary equipment to extract the oil would be too heavy to be carried to Europa. That's where General Motors came in.
"During the 1970s we developed an alloy called Feather Steel that was stronger than titanium but was as light as balsa wood," says James Bryson, head of product development at General Motors. "Not only was it strong and light, but it was incredibly cheap. But what do you do with something like that?" GM scrapped the Feather Steel project, and it was all but forgotten. However, Ronald Murray, a member of the original team that developed Feather Steel heard about NewEnergy's problem and thought the alloy was the answer. Mr. Murray contacted Mr. Bryson, who then contacted Mr. Stevens with whom he went to Andover Academy. "I knew that if we could make the space cars and drilling equipment from Feather Steel," said Mr. Bryson, "we'd be in business."
The teams at NewEnergy and General Motors quickly went to work, and, within a week, they had a working vehicle called the Batt-Mobile Lite, as well as drilling equipment weighing a total of five and a half pounds. The oil will be stored in new Feather Steel tanks that will be able to withstand the stress and heat of re-entering the earth's atmosphere. Mr. Bryson reported that "The tanks are spill proof, so even if the rocket crashes in the ocean, we won't lose a drop."  The rocket's engine was fitted with a Bunny the size of a loaf of bread, which will provide more than enough power to get the rocket and its payload to Europa and back. There has been only one minor setback: The launch was scheduled on July 12 (Henry Thoreau's birthday), but it had to be moved to July 30 (Henry Ford's birthday) due to recent flooding caused by the melting of a nearby glacier.
Mr. Stevens believes that the Bunny and Feather Steel could have many uses in the future. "We plan to send out rockets all over the galaxy in search for petroleum. The Batt-Mobile Lite costs only about $15 to make, so there's virtually no limit to how many planets and moons we can explore." After a moment of reflection, he added, "Just think: If we can find oil out in the far reaches of space, we could solve our energy problem here on earth for generations to come without asking people to change the way they live." And we'll have the heroes at General Motors and NewEnergy to thank.
Posted by Advanced Genius Theory at 9:08 AM

Apparently, "Armageddon" came to theaters about 15 years too early.

Am I the only one that wonders why we need all the petroleum if we have already designed a battery that doesn't need charging for years? Could we just put a version of the battery in a car and give up our dependance on oil??

I find this a bit ironic.

Remember what David Bowman/Starchild said in 2010: The Year We Make Contact?
"Stay away from Europa. It is mine."