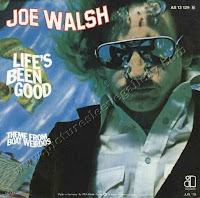 As a kid, I was fascinated by the weird noise in the middle of Joe Walsh's single "Life's Been Good." To this day, I still don't really know how it was made, but I like to think that it is what Walsh hears inside his brain, sort of like the way kids in Charlie Brown specials hear adults. Much later I discovered the James Gang, the best American rock trio of all time, which made his participation in the Eagles confusing. He was so great in his own band and as a solo artist, so it made little sense that he would join a band where he would be relegated to writing a couple of songs, playing an occasional solo, and being a backup singer. At one time I thought that maybe that arrangement was pretty good for him: He got to be in one of the biggest bands in the world without having to be the front man, which would leave plenty of time for his true loves, drinking and doing drugs. Since the Theory came to me, however, I've realized that the problem was that I was trying to make sense out of someone who makes no sense. You could go out of your mind trying to figure out why one of the greatest rock guitarists ever would make an album called Got Any Gum? There's just not a satisfactory answer to it. Sadly, though I'd like to say that his behavior is attributable to Advancement, I really can't. True, he did go solo, join another band, abuse drugs, and clean up, which is commendable. But he doesn’t quite make the cut, and belongs in either the Refined Overt class or perhaps the Authentically Weird class.
Posted by Advanced Genius Theory at 11:54 AM

I dunno about you but I feel that Good Old Joe fits perfectly into the Authentically Weird class. Genius often walks on a razor's edge which as you describe Walsh has teetered on his entire career and believe me getting clean is an absolute form of Advancement. It would be nice to hear more solo music to see to what point he has evolved adding up all his advancements or blunders (depending on point of view) throughout his, in my opinion great career.

He joined the Eagles to lighten the significant load of responsibility he carried as a band leader (and make a tidy profit in the process), so actually a very sane move.

And I'm not going to comment on his weirdness, overtness or advanced status, but after spending the better part of 7 years with the man, I can tell you that yes, he is a genius. He is also more unlike any other individual I've ever met. He is strangely and beautifully unique and about as misunderstood as that characterization would imply.

Another Advanced move was Joe's recurring role as a guitarist named Ed on The Drew Carey Show.