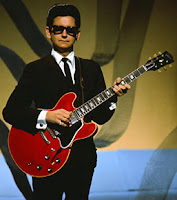 No one is more revered by great musicians of a certain age than Roy Orbison. Luckily before he died he got to play with many of them—Elvis Costello, Tom Waits, Bruce Springsteen—for a show that will definitely be a part of your next PBS pledge drive. Orbison’s great claim to Advancement, as opposed to plain greatness, is his look: all black clothes, dark sunglasses, and ragged, black hair that looked like a crooked wig (which it may have been). He was also in the Traveling Wilburys, which is another notch in the win column. But what intrigues me is that he wrote maybe 10 of the greatest songs in the history of rock’n’roll, but growing up I thought the only song he ever did was “Oh! Pretty Woman,” a perception he helped along by playing only that song on TV appearances. This is very similar to Lou Reed’s playing nothing but “Walk on the Wild Side” for about 15 years. I can only imagine how frustrated Tom Waits must have been watching Orbison play that song to Johnny Carson for the ninetieth time, especially since a lot of kids were probably wondering why some weird old guy was covering a Van Halen song. I don’t think, though, that Roy Orbison is truly Advanced, even though he was such an inspiration to so many Advanced Musicians. Ultimately I think he was just an angst-ridden, slightly mysterious nerd who wore black because it was a way for him to seem cool. I guess you could say he was the Trent Reznor of his time, only without all the weightlifting.
Posted by Advanced Genius Theory at 5:58 PM

Roy is championed by the most advanced purveyor of coffee, advocate of TM and internet weatherman, David Lynch. Two of his best films use an Orbison song as some sort of centerpiece or epiphany point.

I love how the Advanced only like to play their "greatest hit" on television appearances, it kills me!