Vegas is big in the world of Advancement, and a lot of people just love it for some reason. Not me, but I guess that's just Overtness. Anyway, I still found it surprising that John Fogerty is taking his act there:


Fogerty is indeed going to Vegas, and bringing a new show with him. The 70-year-old rock icon describes Peace, Love and Creedence — set for eight performances at the Venetian Theatre, inside the Venetian Las Vegas, between Jan. 8 and Jan. 23 — as an extension of the "1969" tour he launched in 2014 to commemorate the year Creedence released the albums Bayou Country, Green River and Willy and the Poor Boys. "The production we've been doing certainly had extra elements, a lot of visual elements," says Fogerty, who plans to perform other band and solo favorites, from Have You Ever Seen the Rain? to Centerfield. "We're going to use that as a frame of reference, and see if we shake it up a little bit." Fogerty has taken daughter Kelsy "to see Taylor Swift, who I really love"

Even more surprising is how unsurprising it is that, like everyone, he loves Taylor Swift. Hates his old band, loves Taylor Swift. Really, he wasn't inspired to play Vegas because of his love for Swift, he was just commenting on all the choreography in her show and how his show would likely not live up to that, but it's still fun that he loves her. 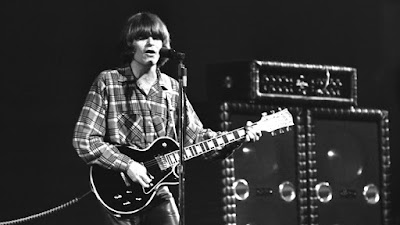