Police Reunion in the Works? 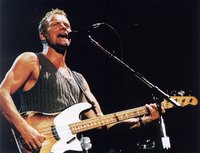 Let's get the year started with a nice rumor:

"Sources told Billboard.com the reports -- in the British press [of a Police reunion]-- were legitimate, but they would not publicly comment until final details are nearer to completion.
This year marks the 30th anniversary of the release of 'Roxanne,' the single that broke the Police in the United States. In a statement issued last month, A&M Records said, 'It is our intention to mark the anniversary by doing something special with the band's catalog of songs. Needless to say, everyone is hopeful the band will support our plans and while early discussions have taken place, nothing has been decided.'"

A reunion would be a good test of the "Is Sting Super Advanced or Just Terrible" question. Or maybe it wouldn't, now that I think about it. After all, if they turn into a lite-jazz band, then you could say that Sting ruined them, but you could also say that Sting made the other guys great back in the day. Oh, Sting, your case is so upsetting.
Posted by Advanced Genius Theory at 1:09 PM

I remember watching the Super Bowl when they announced Sting would be on at Halftime. I said out loud " what is this pompous ass going to sing". Well he sang Message In A Bottle with Gwen Stefani and it was good. I thought then that they must be getting back together. I saw them on the Ghost In The Machine tour and they were great. I saw the Synchronicity tour and they were far away. I'm sure ticket prices will be outrageous.
Sting probably doesn't need the money but I'm sure the other guys could use some lute.

My husband and I have heard/read this in a couple different places this week, and I kind of hope it's not true. I want to remember the Police the way they were.

I was just thinking about the Police the other day, imagining an altnerate universe in which Sting had not retroactively trashed the band's name throughout his solo career. Would this altnernate universe be filled with indie rock bands that actively claimed Police influences along with the bands that are emulating other icons of the 70's and 80's?

I'm tripping on it all over again.