Lou vs. Liu: Do Not Talk While Lou Reed Is Performing 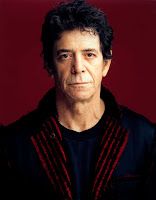 Lou Reed is weird in that he wants people to be respectful when he performs, and he's not afraid to say something about it:

An insider tells us that the iconic rocker demanded the bar be shut down when he sang at Persol's Incognito design exhibit at the Whitney on Tuesday - because he didn't want to hear the clinking of glasses or ice. Onstage, the musician even shouted to the crowd, "Shut the [bleep] up - you're talking too much!"

Apparently one of the fans who obeyed was Lucy Liu. I'm not sure if I like her more or less now.
In related news, Timothy Greenfield-Sanders says the show was "flawless." He talked to Reed, who said, "It''s always fun to play a museum. When I was with Andy Warhol, we played hundreds of them." Especially when you can tell Lucy Liu to shut up and she does, I guess.
Posted by Advanced Genius Theory at 11:50 AM