Donald Fagen on Jean Shepherd and A Christmas Story 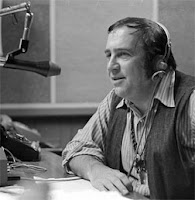 Nice little thing on Jean Shepherd by Donald Fagen in Slate. Shepherd was responsible for the stories that make up A Christmas Story. Here's a peak under the lampshade:

If you know Jean Shepherd's name, it's probably in connection with the now-classic film A Christmas Story, which is based on a couple of stories in his book In God We Trust: All Others Pay Cash. He also does the compelling voice-over narration. On Christmas, TBS will continue its tradition of presenting a 24-hour Christmas Story marathon. There are annual fan conventions devoted to the film—released 25 years ago this Thanksgiving—and the original location in Cleveland has been turned into a museum. But long before A Christmas Story was made, Shepherd did a nightly radio broadcast on WOR out of Manhattan that enthralled a generation of alienated young people within range of the station's powerful transmitter. Including me: I was a spy for Jean Shepherd.

In the late '50s, while Lenny Bruce was beginning his climb to holy infamy in jazz clubs on the West Coast, Shepherd's all-night monologues on WOR had already gained him an intensely loyal cult of listeners. Unlike Bruce's provocative nightclub act, which had its origins in the "schpritz" of the Catskills comics, Shepherd's improvised routines were more in the tradition of Midwestern storytellers like Mark Twain, but with a contemporary urban twist: say, Mark Twain after he'd been dating Elaine May for a year and a half. Where Bruce's antics made headlines, Shepherd, with his warm, charismatic voice and folksy style, could perform his most subversive routines with the bosses in the WOR front office and the FCC being none the wiser. At least most of the time.

Read the whole thing if you've got a few minutes.

Interestingly, Shepherd did make headlines in the summer of 1956. He was fired for not playing enough music (He played none one night, in defiance) and, thought to be non-commercial (he was on from one to five-thirty in the morning) for doing a plug for Sweetheart Soap, not a sponsor, to prove that he "could sell soap." His fans rallied in a demonstration in downtown NYC, and they protested to the station--which hired him back.

Also, he perpetrated that summer, one of the great literary hoaxes of the 20th century, getting his listeners to ask for a non-existent book by a non-existent author (I, Libertine by Frederick R. Ewing). The whole story of this antic made plenty of headlines--and when he and Theodore Sturgeon eventually wrote the book, it became a bestseller. Read lots more about him and his amazing creativity in many fields at flicklives.com, and maybe, read my book about his works, EXCELSIOR, YOU FATHEAD! THE ART AND ENIGMA OF JEAN SHEPHERD, published in 2005. Donald Fagen, a Shep fan, was in part,I imagine, inspired by my book in his fine essay on Shepherd.

"Stupid book"? Many reviewers and interviewers think it's a rather good depiction of Shepherd's career. Have you read it? Tell us why you think it's stupid and I'll defend it. I'd think that people interested in what Donald Fagen has to say about Shepherd might want to learn more about a major creator of our time. (Buy the way, all I get per book sold is under a lousy three dollars--and I pay income tasx on that.) Keep your knees loose!

Buy my book! Please!!!!!!!!!! Won't you PLEASE buy my book??? I swear it's excellent. And I swear I didn't post my original message as a way of advertising my book. Seriously. Swear to god.

(And I don't have a massive ego, either).