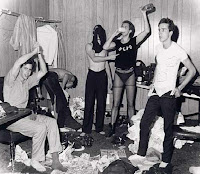 Devo is back, but with a new look and plan:

Casale and Mothersbaugh only hint at the group's new look, but corporate America appears to be the primary target of its social satire.

The band has re-signed with Warner Brothers Records and hired an ad agency to help shape its image, he said.

"The idea was that Devo was going to turn around their reputation for being hermetically sealed and not playing ball with society," Casale said.

Instead of being an art band targeting a niche following, Devo is now using focus groups to choose which songs to include on its next CD and what clothes to wear onstage, he said.

"There's color studies going on, different costumes being shown to people, different mixes of songs, and we're letting people kind of direct us toward a final product," he said.

The goal is for Devo to "penetrate every nook and cranny of our technologically advanced pop culture in the coming year," a recent news release said. "With an arsenal of new songs, videos, fashions, apps, toys, games, live performances and more, we will reach out to create something for everybody."

What do I think? I think it's Advanced.
Posted by Advanced Genius Theory at 8:59 AM

I think it's a sad attempt by a washed up band to regain relevance because the members probably have bills to pay.

(That doesn't mean it can't also be Advanced, I suppose).

I'm sorry to hear you say that.

Wow. And Devo were about as overt as they come.
This is pretty big news.
Also potential for irritant status ("playing ball" really pisses people off--especially people concerned about authenticity)

This struck me as far more advanced:

(Of course, I wasn't aware of advancement when I first saw the CD at Target years ago.

It's anti-Devo to "go corporate", which of course means: they're advanced.

Sad? Washed up? Most if not all of DEVO have been working as professional musicians since their earliest days. They are responsible for scads of well known cartoon and film music. Awards, etc. Trust me, they have money to pay the bills. They've also been known to insert subliminal messages into their advertising work. And now they're ripping on corporate America by becoming corporate America? A. This reminds me of Colbert's SuperPac stunt (which is likewise awesome). B. DEVO is definitely advanced. They appeared on flippin' Regis and Kelly, fer chrissakes. Talk about infiltration! And they stayed completely in their well known DEVO personae as they were interviewed. How much more advanced could one get?