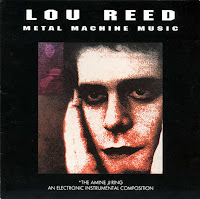 After 35 years, Metal Machine Music is finally being understood and enjoyed (NY Times):

A real-time, chamber-music performance of an inhumanly generated composition: that was Lou Reed’s “Metal Machine Music” as played by the Fireworks Ensemble at Miller Theater on Friday night. Mr. Reed recorded his 1975 album “Metal Machine Music” (RCA) by leaning guitars against amplifiers, cranking them up until the feedback screamed, playing melodies amid the sonic melee and layering and manipulating the results, including changing the tape speed of some parts. Then he chose four segments for 16-minute LP sides. It sounded like a riot in a shortwave radio factory: a fusillade of sustained, pulsating and scurrying electronic tones that adds up to a hyperactive drone, as consonant as the overtone series. It was proudly anticommercial and defiantly arty. It was Minimalistic process music at rock volume, an impersonal wall of sound. Now, 35 years later, it also sounds unexpectedly merry.

I'm guessing this means Mistrial will finally make sense in 2025 or so.
Posted by Advanced Genius Theory at 9:07 AM

Great punchline.
Seems like David Fricke understood Mistrial way back in 1986.
review
Maybe it's his Metal Machine Music.
I'm still waiting for it to kick in.

It was reported (I'm sure tongue planted sarcastically in cheek) by Lester Bangs (of the famous Lou Wars in the early 1970's) that Bangs would attract girls over to his car when stopped at intersections in Detroit, playing MMM at full blast on his 8-track....right...