The headline Spin uses in its review of PiL's new album: "Public Image Ltd. Accidentally Make an Enjoyable Record With ‘What the World Needs Now…’" Rather than rant about this--"accidentally"?--I'll just give you some promising bits:


“The toilet’s f–king broken again / I repaired that, I told ya / Get the plumber in again and again and again” is no nostalgia trip; that’s age and decay all the way. More importantly, his band of whoevers — this time containing an ex-Spice Girls sideman and an ex-Neneh Cherry husband — plays rock, with permutations ranging from spy-surf-Goo licks under “Bettie Page” and ’70s boogie rock on the literal and qualitative centerpiece “The One,” which is a love song, brought home by an ersatz Edge guitar hook that should offend Pistols and PiL fans alike.

I like the sound of all this! But there's something even better:


The bending synths that underscore “Know Now” recreate the over-incanting title histrionics of the Sex Pistols’ “Liar?” Piece of cake. This whole record is, really, even the burbling, eight-minute “Big Blue Sky,” which flirts with reggae Peter Gabriel.

Spice Girls, boogie rock, offended fans, and reggae? Now that sounds like some classic Advancement to me.

I guess a lot of people, not just Spin, would be surprised that this would be good. But we know better. 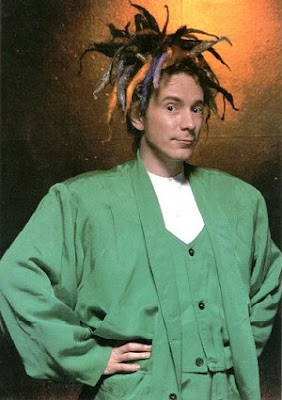 Posted by Advanced Genius Theory at 11:17 AM