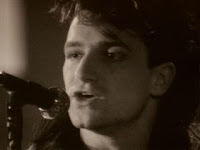 From Pitchfork (you may have heard of it):

Pitchfork: Daniel, the story goes that Brian Eno recommended you produce U2 after they first came to him.

Daniel Lanois: Brian and I had been working in Canada in a town called Hamilton. We'd been making ambient records [including On Land and Apollo] for a few years, some very cool records. But I'll be real straight with you. During that ambient music-making chapter, I was pretty isolated. Nothing had really come my way that was illustrious, in terms of invites. I had poured my soul into these ambient works with Eno, and a lot of phone calls were coming in-- David Bowie was calling, Iggy Pop the next day. None of them to me, all to Brian. Brian was pretty much in the fast lane of record making at that point. He was pretty much on the pulse of things in New York City, and then he said that he wasn't producing records anymore. He was finished with it, and was therefore not interested in working with U2.

Brian Eno: I had never worked with that kind of music before, and I was not completely convinced that I would be the right person for it. I thought, well, I can handle the ideas side of it all right, but can I handle the actual traditional production side alright? I knew Dan was very good at that side of things, and very good at working with bands, getting the best out of the players and so on, so I said, "Why not have both of us? We'll sort of overlap in some parts, but we actually sort of serve different functions as well." That was how that working relationship started.

I would read the whole thing if I were you. By the way, I wonder if the Pitchfork folks were intentionally making a joke about Eno/Lanois remembering the unforgettable fire. I hope so.

One other thing: it's giving me chills thinking about how good that record is.
Posted by Advanced Genius Theory at 2:42 PM