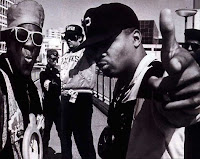 Public Enemy are asking fans to help fund the recording of their next album. The rap collective have signed a deal with fan funding engine SellaBand, and are aiming to raise $250,000 in increments of $25 in order to record and release the as-yet-untitled album. In return, fans who invest in the album will receive a share in the revenue of the album, as well as a numbered copy of it.

Speaking about the deal in a statement, Public Enemy's Chuck D hailed SellaBand's business model. SellaBand's financial engine model goes about restructuring the music business in reverse, he explained. "It starts with fans first, then the artists create from there. The music business is built on searching for fans and this is a brand new way for acts to create a new album with fans first, already on board."

I like the idea, of course, but: If you invest $25 of $250K, and the artist is likely to get a fair portion of the royalties (which is why they would be doing this instead of working with a label), how many records would have to be sold to get even your initial investment back? You're probably better off just buying the record for $15. But then again you wouldn't have the same pride of ownership.
Posted by Advanced Genius Theory at 9:00 AM