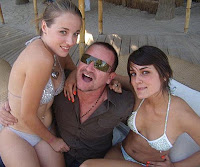 Bono has a pretty sweet gig all the way around. Here's part of the story of "One":

We scan inside the cool cathedral of Hansa, a recording studio made famous by David Bowie, Iggy Pop and Nick Cave. In earlier times, it was a ballroom popular with the Nazis. The members of the Irish band hold a prayer meeting to exorcise the demons. (Seriously.) But it is their own personal demons that are present this day.

About to leave their 20s, the bandmates are bumping into one another’s adult-sized egos. Men, they discover, when they become lords of their own domain, can lose the supple nature that a band requires. For these Irish musicians, the love it takes to sublimate one’s ego for the meta-ego of the band is more and more being reserved for families.

BRIAN ENO, a producer, is only half-joking when he tells the band that “possessions are a way of turning money into problems.” The band has had a taste of success and, even worse, a taste of taste, poison to the pursuit of rock ’n’ roll.

The dreamspace in which songs emerge has been filled by nice houses needing not-nice art. ADAM CLAYTON dreams of Jean-Michel Basquiat; Bono of Louis le Brocquy; EDGE of designing furniture; LARRY MULLEN of not being in Berlin.

Edge, the Zen Presbyterian, no longer a study in restraint, is heartbroken, in the middle of splitting up with his wife; he now sees the same fate for his band. He is trying to write an eight-bar lift section for a song called “The Fly.” He writes two, but when he and The Singer put them together a different song emerges ... and fresh words and a new melody come out of The Singer’s mouth .... the words fall out.

BONO It doesn’t have to be. I can give the verses enough bile to balance the hook. It’s no big kiss, it’s a shrug of resigned optimism. Really, it’s the polar opposite of the kind of hippie nonsense you would expect with a title like “One.”

ADAM (one eyebrow permanently raised, thinking they should get on with it as it’s the first good thing the band has done all month) Isn’t “One” a Bob Marley song?

ADAM I don’t care — as long as I believe you when you sing it.

DANIEL LANOIS (also a producer) I don’t care, as long as there are lyrics. What’s it about?

BONO I don’t know yet .... Er, having to live together rather than wanting to. It could mean a lot of things to a lot of people.

BONO It’s a song about love, not a love song.

This is a good example of Bono's Overtness. He's afraid of writing a love song, has to balance the hook with bile, and it is the opposite of something (hippie nonsense). Bono needs to just Advanced already.
Posted by Advanced Genius Theory at 3:01 PM

Email ThisBlogThis!Share to TwitterShare to FacebookShare to Pinterest
Labels: bono, U2