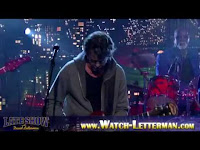 Wake the kids and phone the neighbors (from EW):


Is David Letterman on his way to becoming a music-biz mogul? The Late Night host’s Worldwide Pants, Inc. has just started a record label called Clear Entertainment/C.E. Music. Letterman’s first signee, announced this morning via press release, is Huntington Beach, Calif. pop-punk quintet Runner Runner. Runner Runner’s self-titled debut is due late this summer on C.E. Music in partnership with Capitol and MRV. You can hear lead single “So Obvious” right now on their MySpace.

Not so excited about the band, but this is kind of interesting. Does Lou Reed still have a label?
Posted by Advanced Genius Theory at 2:07 PM