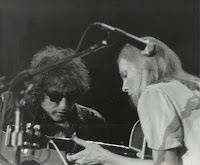 
Joni Mitchell has declared that Bob Dylan "is not authentic at all".

Speaking to the Los Angeles Times, the veteran folk singer revealed that she has little respect for the 'Blowin' In The Wind' icon, whose real name is Robert Zimmerman.

"Bob is not authentic at all. He's a plagiarist, and his name and voice are fake. Everything about Bob is a deception. We are like night and day, he and I," she said.

of course he's a fake. all his early songs steal from woody and the rest are blues riffs. even songs i like, such as ballad of a thin man, are just babble, and not even good stream of conscious babble but lack of inspiration babble. guess that makes him genius to some persons.

Who cares if he's "authentic?" I look for authenticity in all sorts of things, but not pop stars.

Plus, Dylan's ridiculousness is part of what makes him who he is. That, and an uncanny ability to write timeless songs (even if they are "stolen from Woody").