Elvis Costello at the Tabernacle in Atlanta 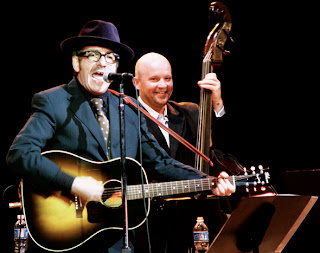 I saw Elvis Costello live for the first time last night. His lineup consisted of a violin, a dobro, accordion, mandolin and two guitars (including his). There were no drums, but they were not missed because the mix of instruments created enough percussion to roll things along. He played several covers, most notably "Femme Fatale," "Friend of the Devil" and "The Race Is On," songs from his recent album, and total reworkings of his familiar tunes, including "Alison," "What's So Funny etc." and "(The Angels Want to Wear My) Red Shoes."

He started out with a blazing version of "Mystery Train," during which the musicians traded solos, bluegrass style. I was surprised at his energy from the second he walked on the stage. I shouldn't have been, of course, as he is a professional musician and performer, so he knows how to look excited, even when he isn't. But if he was faking, I couldn't tell. The impression that I got was that this was guy in love with music and will always be happy to get a chance play for people. He also surely was energized by the talent he had on stage with him, and he let them steal the show on a number of occasions.

It got me thinking about how the Advanced (and I've been on the fence about Costello) are often criticized for reworking their hits, exploring new genres, and generally not doing what is expected of them. I think it comes down to their affection for music and the realization that they have the ability to play the songs that made them want to be musicians in the first place. All they have to do is put together some ace country musicians and suddenly George Jones and Merle Haggard tunes become possible. Costello has done just about every kind of music there is, which has probably hurt his career in terms of keeping fans, but I can't imagine he has any regrets. How could you when you get to see Jim Lauderdale and Jerry Douglas playing every night?

The show lasted about an hour and a half and really never lost steam, even as the band did some more atmospheric numbers. I haven't actually heard the album that some of the songs came from, but that didn't matter. Everything was good, covers, new tunes, familiar songs, everything. For me, "Femme Fatale" was the high point, not only because it is tied with Advancement but because it was truly beautiful (and I appreciate the southern accents in the backup singing). I halfway expected to hear a Dylan tune because I think that is the artist Costello most resembles in his career (with the exception that his voice has only grown more powerful) in that he is constantly changing and redefining himself as an artist to the point where there is no such thing, or no one thing, as an Elvis Costello sound.

If he's in your town, go see him!
Posted by Advanced Genius Theory at 8:43 AM