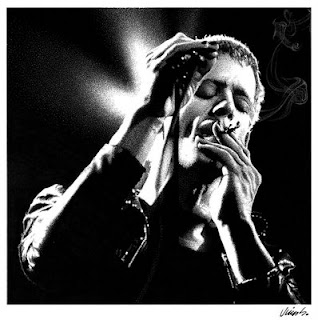 From Yahoo, from Reuters:

It was dismissed as "career suicide" and a joke, and some fans returned the record thinking it was faulty, but rocker Lou Reed is re-releasing a digitally remastered version of his 1975 album "Metal Machine Music." And, despite the absence of melody and vocals and the unending presence of feedback, the 68-year-old rocker best known for his work with the influential band The Velvet Underground is touring Europe playing music inspired by the record with the Metal Machine Trio. When collaborator Ulrich Krieger approached Reed and proposed the idea of analyzing the sounds of the album and performing them on stage, at first the singer was dubious. I said there's no way. That's absolutely impossible, Reed told Reuters in an interview in London ahead of a performance at the Royal Festival Hall in London and before he moves on to Paris, Brussels, Copenhagen and Oslo (www.loureed.com).

I've posted about this a lot, but I just wanted to use this as an excuse to get back to the blog. The book comes out in about four weeks, so I plan to get back to blogging every day so people new to the Theory (I expect literally tens!) will not be disappointed.
Posted by Advanced Genius Theory at 5:29 PM