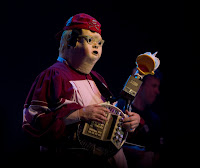 Allow me to cut and paste from a press release I just got:

DEVO are set to release their first new studio album in 20 years.  The new album, entitled "Something For Everybody," is the follow-up to 1990's "Smooth Noodle Maps."  UK release date for the album is Monday June 14th, followed by North American release on Tuesday 15th June.

Thirty years ago, people said that we were cynical, that we had a bad attitude, says Devo's Mark Mothersbaugh. "But now, when you ask people if de-evolution is real, they understand that there was something to what we were saying. It's not the kind of thing you want to see proven right, but it does make it easier to talk about."

More than three decades after the release of their visionary debut, Q: Are We Not Men? A: We Are Devo, and a full 20 years since their last studio album, Devo are back with the aptly titled "Something for Everybody". The long rumored, wildly anticipated album (which was recently launched with a memorable performance in Vancouver at the Winter Olympics) features the band's classic line-up - Mark and Bob Mothersbaugh, Gerald and Bob Casale - joined by drummer Josh Freese (Nine Inch Nails, Guns n' Roses).  Click here for the full announcement and album artwork - http://www.noblepr.co.uk/Press_Releases/wme/devo.htm  Produced by Greg Kurstin (The Bird & The Bee), the album also includes contributions from John Hill and Santi White (better known as rising hip-hop star Santigold), John King of the Dust Brothers, and the Teddybears.

Devo's sound, style, and philosophy have been an influence on artists from Rage Against the Machine to Lady Gaga. Kurt Cobain once said, "Of all the bands who came from the underground and actually made it in the mainstream, Devo is the most challenging and subversive of all." The world is in sync with Devo, says his band-mate and co-writer Gerald Casale. "We're not the guys who freak people out and scare them - we're like the house band on the Titanic, entertaining everybody as we go down."
Posted by Advanced Genius Theory at 9:04 AM

Email ThisBlogThis!Share to TwitterShare to FacebookShare to Pinterest
Labels: devo