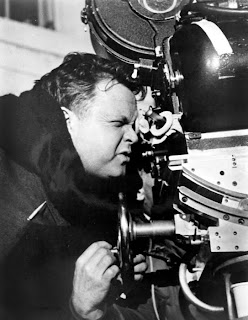 On Thursday, 6 May, Turner Classic Movies will air a mini Welles film festival, featuring a few of the films that the controversial and ruthlessly ambitious Welles deigned to appear in for filthy lucre, as well as his 1941 landmark classic, Citizen Kane (showing at 5:45 PM, all times EST).

The first film in the impressive line-up, shot for RKO Pictures in 1942 from a screenplay by Welles and actor Joseph Cotten (based on a novel by influential British spy novelist Eric Ambler), is Journey into Fear (airing at 11:30 AM), described by Welles biographer and noted French film critic Andre Bazin as “a rather humorous and fantastic spy story set in Turkey” during World War II. There has been much doubt over the years, however, concerning the true director behind the film. In Orson Welles: A Critical View Bazin notes:     “In theory, Norman Foster was the director of this film, with Welles producing and acting. In point of fact, it is clear that Journey into Fear is to a great extent the work of Welles, who has left his mark on the script, while numerous directorial touches bear his stamp, notably the killer’s musical motif, in which one recognizes Welles’ taste for musical effects and aural atmosphere. Moreover, after the first press show, dissatisfied with the film’s last sequence, Welles demanded and obtained permission to reshoot it.”

Welles, in case you didn't know, was seriously Advanced.
Posted by Advanced Genius Theory at 10:53 AM