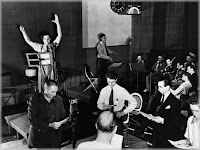 
In one basic respect, [author] Chris Feder shares with the general public a sense of frustration that the great man didn't furnish what was either wanted or expected of him most of the time; this was his genius as well as his misfortune. For in order for an artist (or a father) to be consistent and dependable -- that is to say, consumable, offering some sense of security -- he has to behave predictably, and this was the last thing Welles was capable of doing most of the time. Producing works that were unforeseeable and therefore somewhat indigestible when they first appeared, which meant that we all often had to spend years catching up with them, he was out of step mainly because he remained ahead of our expectations. He had to pay an enormous price for this, but so did we.

Read the whole thing.
Posted by Advanced Genius Theory at 9:22 AM

Jason, have you seen this yet?