You Don't Have to Help Make Nicolas Cage Look Crazy

There is a new documentary about the Tim Burton Superman movie that never was. As you almost certainly know, Nicolas Cage was going to play Superman, which would have been awesome and probably Advanced, since the Advanced like to associate themselves with superheroes (and Super Bowls). But since it never happened, we've all been left to imagine what it would have been like, and of course the film we imagine is almost certainly better than the movie Burton would have made because we make all the creative choices. Cage says this:

The only thing I’ll say about that — because that is such a lighting rod hot topic and if I say anything at all it just seems to snowball — but I will say that I had great belief in that movie and in what Tim Burton’s vision was going to be for that movie. I would’ve loved to have seen it, but I feel that in many ways, it was sort of a win/win because of the power of the imagination. I think people can actually see the movie in their minds now and imagine it and in many ways that might resonate more deeply than the finished project.

Pretty reasonable, I'd say. But the writer who was reporting on this prefaced that comment with:


">[Cage] didn’t have time to be part of the film during production—but he’s now offered up some suitably nostalgic (and slightly crazy) comments on the project.

I guess it's not big deal, but Cage does actually slightly crazy stuff, so why do people feel the need to shoehorn everything he does into the Crazy Nic Cage narrative? He and Billy Corgan should hang out at Disneyland sometime to commiserate, and maybe collaborate on a song called "What the Fuck Do You Want from Me?" 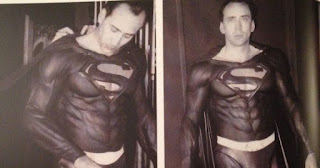