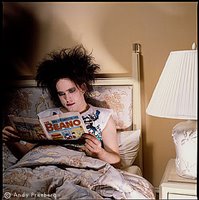 "Thirty years in the music business is no prevention for writers' block. That is the problem facing the Cure frontman Robert Smith, who is struggling to come up with lyrics to some of the 33 new songs the band has recorded for its 14th studio album. The record's release has already been pushed back to May and the group goes on tour in March, so the pressure is on for the 47-year-old, who does not want to his legacy to be an aging band that gradually fades into the background.'I want them (the words) to mean something, it's not enough that they rhyme,' Smith told Reuters in a recent interview. "I find myself stopping short and thinking I've done this before, and better. 'I've given myself a deadline to finish the words before Christmas.'"

Christmas is an Advanced deadline for Smith to give himself. Doesn't he know that the Cure are supposed to be gloomy, while Christmas is cheerful? One might expect a Halloween deadline, but not Christmas. Overt Cure fans would probably be surprised that Christmas is even a part of his reality, but we all know better than that. And speaking of Christmas, hating it is Overt, as is complaining that Christmas ads appear before Thanksgiving.
Posted by Advanced Genius Theory at 5:02 PM

Email ThisBlogThis!Share to TwitterShare to FacebookShare to Pinterest
Labels: Overt, the cure