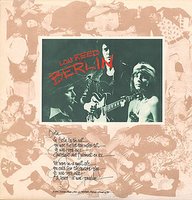 I'd love to believe you've all been waiting for my review of the Berlin concert (or that there is an "all" out there reading this), but I've been too upset about the Allen Iverson situation to write. Now that he is snuggled safely in Denver, I can finally put my mind to the important work of telling you what I thought. As "Sad Song" came to a close, I considered rushing home to the computer and writing: It Kicked Ass. But now that I've had all this time to think about it, I can't leave it at that. So let's start with before the show began:

When we passed the bar, we heard the music play. And the music was, of course, Lou Reed. It was a song I didn't recognize, but I'm familiar with it now because it was played on a loop for nearly a half hour. There was a scrim in front of the stage onto which was projected various images of waves in what looked like a tropical climate. That's what I always think of when I hear Berlin: the beach. Anyway, the music and imaged looped over and over, and as I got more excited, I almost wished the show would have been already finished so I could start remembering it. Just as I got back to my (assigned) seat after racing to the bathroom for the second time (two beers), the lights went down. Lucky thing, too, because had I been late, I wouldn't have been allowed in the room until after the first song was over. That's what happens when you go see someone Advanced.

Julian Schnabel pretended to be humble as he said a few words about his relationship with the record, dragging his hand through his hair to show how nonchalant he was about the whole thing. We all pretended to care, and he went away. The scrim came up.

I was expecting costumes and other Advanced features, but the only theatrical element to the show was the film projected behind them, which you could barely see. That was nice. Everyone in the band dressed as if they were just playing at their practice space. I've noticed that Lou Reed has embraced a toned down Advancement, style-wise, which makes sense, as Advancement is all about doing what is comfortable for the artist and uncomfortable for everyone else. To the right (stage left) were four horn players, a pianist, and Fernando Saunders, who played regular bass and Advanced bass (stand-up fretless electric). There was also a roving cellist. Upstage in the center back was the drummer, protected by an Advanced clear plastic wall. Reed was front and center, of course. To his left was another bass player (Advanced variety), two back-up singers (one African-American woman--an Advanced necessity--and Antony). Behind them was a youth chorus, who seemed to enjoy themselves. And now the music.

It took the band a couple of songs to get their act together. They were good, but a little ragged. Reed was reading the lyrics off of something from time to time, and it felt a little like watching a favorite actor on SNL reading the cue cards just a little too obviously. But then they all settled down, and he started playing with the lyrics. I'm sure you've heard him do this: He waits to deliver the expected line just to the point where you think he won't be able to squeeze it in, then hastily throws it out there, seeming arhythmically. I know that must frustrate the musicians, but Advanced artists always enjoy playing tricks on the band to keep them on their toes (Chuck Berry, Bob Dylan, James Brown, Elvis, etc.). He still can sing when he wants, and in this environment he almost had to because otherwise he would have clashed with the kids' chorus. Of course, "oh, oh, oh, oh, oh, oh, oh, what a feeling" went down instead of up, but it worked nicely.

Signs of Advancement were few, but there were some rockin' solos that might have offended the delicate ears of the Overt. Luckily, that's not us.

Like I said, it took a while for the band to really get going (though I still had chills most of time), things really got going on "How Do You Think It Feels." The band was very precise, and the sound was overwhelming. Actually, I should say a word about "Caroline Says (I)," particularly the chorus. They did an amazing job on the backup vocals, sounding quite a bit like the record. It was fun to close your eyes during this show, by the way. Anyway, the band got more and more precise, perhaps due to the conductor, who at first appeared to be in a lab coat (it was actually just a long coat that matched the chorus). It was during this song that Reed gave his first "I am the master of rock and roll, and if you don't believe listen to this" look.

I don't care for Oh, Jim very much because I'm not Advanced enough I guess. But it won't be hard for you to believe that this seemed to be his favorite song to play. He traded solos with his guitarist, encouraged the backup singers to trade scats with him, and generally just romped around. I enjoyed it, but I didn't like it. But that just made the next number, "Caroline Says (II)" all the better. It was more like a dramatic reading of the song, and it's possible the song nearly brought him to tears (it did me). When I imagined this concert, I dared not hoped it would be as good as this song. And then it got better.

"The Kids" was almost too much to take. This was the song that made me love Berlin several years ago and to hear that bass line live shattered me. Also, to hear him, the actual Lou Reed, singing "I am the water boy" was like hearing Abraham Lincoln giving the Gettysburg Address. The children crying out (which made me want to go give my baby a hug) was prerecorded, but the out-of-tune flute solo was played live. They reproduced the feel of the album perfectly, only it was even more intense.

On a normal album, "The Kids" might be the high point, but no, no, no, there was "The Bed." I'm starting to run out of steam in my review, so there's no way I can do this justice. But if you like this song and didn't go to the concert, you are very jealous of me right now. The chorus did and absolutely amazing job on this one, mimicking the record with eerie exactitude. Lou Reed looked over at them proudly as their voices floated down over the end of the song and into the introduction of the finale, "Sad Song":

It Kicked Ass.
Posted by Advanced Genius Theory at 4:41 PM

I hope they had the tapes running at this event. How many were in the audience? How were the acoustics?

It was a sell out, and it was also filmed, so don't worry! The sound was very good. Sometimes I wanted to hear more of this and less of that, but that always happens.