Nicolas Cage in "Bad Lieutenant": Don't Call It a Remake 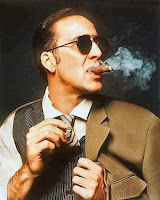 Completely awesome on a million levels:

Despite the similarity in title to Abel Ferrara's 1992 cult classic "Bad Lieutenant," and Ferrara's obvious displeasure at the idea of a remake, Cage and German director Werner Herzog say their movie is not connected.

"It would be unfair to compare the two movies," Cage told Reuters in an interview in Venice, where the picture is in competition at the annual film festival.

"Harvey's trajectory is really dealing with guilt and all of that, and perhaps fits more into that (Judeo-Christian) program, so to me it's a completely different story and a different cop," added the 45-year-old, who won a >best actor Oscar for playing an alcoholic in "Leaving Las Vegas."

Ferrara has criticized the idea of a remake, and was quoted in the media as saying: "I wish these people die in hell."

Hats off to Herzog on creating a totally original version of being an Advanced Irritant. Also this is a perfect illustration of something that is not the opposite of what is expected from an artists, which is at the heart of Advancement. What gave Cage/Herzog the idea that this project would inspire anything but rage? Fans of the original will be mad, non-fans won't see it, so why would they do it? And who's paying for it? Whoever it is may be the most truly Advanced player in this whole project.

By the way, if you've never seen the original, he really is a bad lieutenant. Very, very bad.
Posted by Advanced Genius Theory at 3:46 PM

I had already pegged Nic Cage as advanced, but hadn't considered Herzog