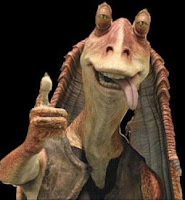 One thing I hear from time to time is that the Advanced Genius Theory is pretentious. I really don't understand why, exactly. It's true that I tried to construct a logical argument to prove that there is merit to Advancement, but I don't use big words or many highfalutin arguments ("highfalutin" sounds too much like "rootin' tootin' to be pretentious), so I would have thought I'd be in the clear. I do mention some brainy folks to support my argument, but just as often I quote guys like Powers Boothe. My favorite instance of pretentiousness is my acceptance of Jar-Jar Binks rather than declaring him a CGI rendering of the death of George Lucas's credibility. I compare him to Chewbacca, not Othello. Perhaps the issue is not that I'm pretending to be smart but that I'm pretending to be dumb? Or maybe that I'm saying that being dumb is actually smart? Of course, I'm not doing either of those things, I'm just guessing.

Mesa just no get it.
Posted by Advanced Genius Theory at 4:35 PM

It's easier to introduce as a hypothetical game and once you've hooked them that way, they see the surprising amount of truth you can pull out of the theory.