Why Eric Clapton Is Like Keanu Reeves in The Matrix 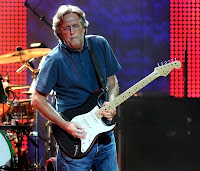 An excerpt from Advanced Genius Theory:

I want to like Eric Clapton, I really do. He seems to be the ideal candidate for Advancement—aging rock'n'roller, sold out by doing beer commercial, participated in a Cream reunion—but I think he's just authentically terrible. I know that some people, people I respect, revere him, but I find his style of guitar playing incredibly boring. And his songwriting is truly dreadful. The obvious examples are "Tears From Heaven" and "You Look Wonderful Tonight," neither of which I can sit through from beginning to end. Don't even get me started with his idiotic nickname, Slow Hand. I think the biggest reason I can’t get on board with him is that he is so devoted to the blues, which I also really can't stand. (Again, my fault.) I say he's devoted because he says it, not because there is much evidence that it's true, at least post-Unplugged. That aside, the kind of blues he worships is particularly irritating to me. If there is anything more predictable, it's straightforward electric Buddy Guy-style blues, especially played by a chinless, wife-stealing British white guy. At the very least he could have emulated Robert Johnson, whose style was genuinely strange. Of course, Johnson is the most Overt of all possible blues influences.

As usual, I'm perfectly willing to accept the fact that I'm probably the idiot here. Clapton was in the Yardbirds, a decent band, but he quit them for his Overt love of the blues. Pretty tedious, but at least there was a principle involved that he could later betray. Cream was in fact a pretty good betrayal of those principles, and they rocked pretty hard at that. If there were an argument to be made inside my head for the Advancement of Eric Clapton, it would have to be his involvement with Cream. It was one project that he didn't ruin by his presence, kind of like how people loved The Matrix because Keanu Reeves wasn't all that terrible in it. Clapton, then, was the Reeves to Ginger Baker and Jack Bruce's Lawrance Fishburne and Carrie-Ann Moss. Just as Reeves was needed in The Matrix to play a character in permanent "whoa!" mode, Clapton was necessary to keep Cream grounded. Without his wah-wah solos, "Tales of Brave Ulysses" could have wound up sounding ridiculous, and that's a possibility I'd prefer not to contemplate.

Everything after Cream has been awful as far as I can tell. There wasn't even a "Dream of the Blue Turtles" for me to look to as proof that he could achieve something as a solo artist. Even still, I'm leaving the door open for someone to prove me wrong about him. It's possible that, like Sting, he is just beyond my comprehension. He could have lapped boring into being interesting. I do find it somewhat compelling that he has gone preppy in the last few years, wearing khakis and short-sleeve cotton shirts on stage instead of the suits he wore there for a while. He's chosen a look that reminds me of what a retired man who has given up suits would wear to a nice restaurant. It's strange, yes, but not Advanced. If he shows up in leathers for the next Cream reunion, then I'll be ready to change my mind.
Posted by Advanced Genius Theory at 4:11 PM

As usual, I'm perfectly willing to accept the fact that I'm probably the idiot here.

At least you have had some level of self-examination. It's about the only thing you have accurate in the article. You whiny idiots don't recognize talent or dedication where you see it.

Where is your talent? Where is your $500 million fortune like Clapton has earned from people putting their money where their mouth is and enjoying his work? They all must be wrong and you must be right.

Quit looking and dwelling on people and things you don't like or can't compete with. It's all whining and there is too much of it already.

Anonymous: you should read a bit more of my work and you'll realize that I don't dwell on things I don't like. I also don't equate fortunes with artistic success, though I also don't discount popularity.

He's always seemed to lack authenticity. He's never compelled me. He was a great role player in CREAM, but never captured me by himself. Different strokes, I guess.

Anonymous clearly has not read your book, nor has he (or she) have a clear understanding of Advancement. I would guess he (or she) is a HUGE Clapton fan, which jades the thought process.
Money and where he puts it are not really in question here (although if he were to fund a saturday morning kids cartoon with dragons and compse some music for it, I would definitely feel aome thought toward advancement would be warranted).
What Anonymous needs to understand is that you aren't destroying the guy for his talent....only speculating on why he has not achieved Advancenment. My advice.....reead the book, and learn what is meant by "Advancement," and then realize that while J.H. has never been a big fan of Clapton, he usually doesn't let that sway him away as to whether he is advanced or not.

Clapton's finest hour was when Cream recorded White Room.....since then he has been a non-entity.......

For laughs, here' my theory on Eric Clapton:

It's true. Clapton's dull. And has been most of his career(Cream was ok).

Don't really dig Clapton either. I love blues. But listening to Clapton makes puts me to sleep...his music just doesn't impress me. Yeah he's done a lot of great stuff and gained fame...so what. In his day it was a lot easier to be famous as a guitar player cause there just wasn't many out there on the whole blues/space rock wagon. What am I suppose to show appreciation to Clapton because everyone else does? No, he's...well...boring. The only songs I've listened to all the way through of Clapton's is While my guitar gently weeps and white room...

You forgot Blind Faith and Derek & the Dominos, dumbass. You're all ignorant fat bitches to find Clapton's playing boring. You know what actually IS boring? Post-Barrett Pink Floyd, and yet all we ever hear about is how innovative the Dark Side of the Moon was. I'm not a fan of Clapton's solo material either (not that I've given it much of a chance. Then again, neither have you, most-likely). Just face the facts that you don't really have reason to judge Clapton's playing, as you probably don't like listening to anything out of your comfort zone: the same three shitty songs by Grand Funk Dildo or one of those shitty bands. Eric Clapton may be a wimpy little cuck, but he's likely a better guitarist than you, shitbird. Peace.