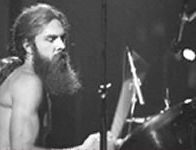 From a press release:

The man who kept the beat on such all-time southern rock classics as "Saturday Night Special," "Gimme Back My Bullets," "That Smell," and "What's Your Name" is back with one of his finest solo albums yet, 'Artimus Venomous.' In an era where 'Pro Tools perfection' is the key for most rock bands, Pyle turns back the clock to a time when rock bands truly rocked – with actual fingers on fretboards, sticks on drums, and little else between what the mics picked up and what wound up on tape.

And in addition to being one heck of a drummer (just about every southern rock drummer post-1975 has purposely or inadvertently borrowed a thing or two from his work with Skynyrd) Pyle possesses one heck of a classic rock voice, as he provides lead vocals throughout most of 'Artimus Venomous.' Standout tracks include the title cut, "Knock Me Down," and the gloriously titled " Blood Sucking Weasel Attorneys."

Jase,
Were you aware that you went to school with Artimus Pyle's son and his neice? Its true, you Irmo grad, you!

Let me guess: They thought I was a nerd?

The very same......Chris and I hung out in Quail Valley quite a bit. I remember sitting in a shed in the backyard of Chris' mom's house listening to Artimus just completely rip through a drum solo. It was pretty cool.