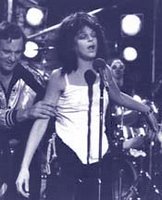 Another lovely friend of Advancement sent me a press release that is pretty awesome:

Have Patti Smith and Prince been talking? You know, I've always thought Patti Smith was about as Overt as you can get, but this is a pretty bold statement of Advancement. I'll have to hear the record for myself, but I'm pretty excited. The inclusion of a hip-hop producer is a particularly nice touch.
Posted by Advanced Genius Theory at 4:44 PM

I've always admired Patti for dumping her feminist principles and taking her husbands name when she got married.

she was never a feminist. And she didn't take her husband's name. They had the same last name.

Note to self: don't try and be funny.

Sounds perfectly awful, like every other thing she's ever touched. Pretentious. Opportunistic.

Hey buddy. Did you see this:

Hope you well. Love to Jenny.