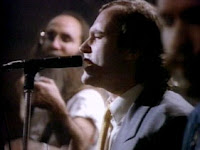 There is a very nice interview at adequacy.net. My favorite part had only a little to do with the book:


Sitting back while Hartley elaborates the theory and reasons whether so-and-so has Advanced or is a even a candidate for future Advancement is a true pleasure. If you and your friends have ever taken an absurd idea to the extreme, The Advanced Genius Theory should strike a chord with you. For instance, one night my buddies and I came along a copy of Face Value by Phil Collins and “discovered” Collinsization, which is simply playing Phil Collins to one of your friends when they don’t expect it (and it predated the Rick Roll by a good 5 years). So that night we called our one friend who admitted the first cassette he owned was Invisible Touch, and another friend who is English and so was guilty by geography, and simply played a little “In the Air Tonight” and “I Missed Again” into the telephone. It was such a fun humiliation game that we spent the rest of the night hashing the theory out: If you hear Collins, it’s Collinsization, but if you hear a Genesis song it’s Genesicide, and if you listen to Phil Collins on purpose it’s called Sussudiocide. In those years it wasn’t strange to see someone cover their ears and run out of a bar to avoid the humiliation. Debates carried on about whether you could be visually Collinsized simply by seeing his face, or if his voice and/or drum breaks were the only valid means to the end. Side theories developed such as Enomunization, or the idea that listening to Phil Collins in small doses as the drummer on Brian Eno’s solo records makes you less susceptible to harm through Collinsization. It is this rigorous and imaginative spirit that Hartley channels when detailing Advancement.

Sussudiocide.
Posted by Advanced Genius Theory at 8:47 AM