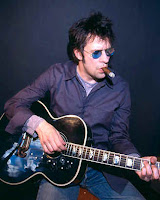 A reader (Tom) sent me a note this morning, and I thought I'd share the exchange...


Tom: [Westerberg] Advanced or not? Former slop-rocker does kids movie soundtrack (Open Season) which is probably one of his best solo albums, and has a guitar made by First Act sold at Walmarts. Also Lou's concert for dogs was one of the most advanced acts by an artist. If he releases a CD, that is inaudible to humans, made for dogs, I will rejoice.

Me: Great stuff about Westerberg. I didn't love the Replacements, but enough of my friends do to make PW qualified. I didn't know about the Wal-Mart deal, but obviously that is awesome.

As far as the dog album goes, a release on CD would be one-upping Cage because Reed's actually has sound that you can't hear, whereas Cage simply "created" nothing, which is just the opposite of something.

I love Paul Westerberg, but outside of working with Don Was, I don't think he's really shown any Signs of Advancement. He seems to be a bit of a contrarian, rendering himself more overt. A Replacements reunion with only Tommy on board might be a good start. Changing up the arrangements on the classics would help too.

Yeah, the Walmart guitar is pretty awesome though.

I'm not sure if Yoko has the necessary background/foundation to Advance, but if nothing else, this layout has gotta count for something: http://en.wikipedia.org/wiki/Starpeace