I Didn't Write What I Know 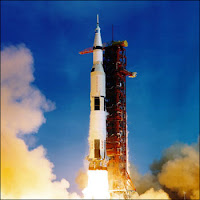 We had been waiting on the launch pad for about three hours when the phone rang. It was Mission Control. "The guys at IT think there might be a problem with the navigation coordinates, so you might as well eat your hamburgers now." The burgers were a little cold and the bun was soggy, but no one complained. "I'll make it up to you guys when we get into orbit," I said, as I opened the pickle jar. My crew and I had been through a lot together, starting with our sorties over the DMZ. You don’t get hamburgers—soggy or otherwise—when you’re out fighting Migs over the Pyongang desert.

In addition to my usual crew was a new guy named Olaf. He was a Dane who stood about six feet eight and went about 300 pounds. Olaf was as strong as the rest of us put together, and he was going to need every ounce of that strength for his part of the mission. We were taking our rocket ride to fix a satellite that had gone out of orbit, and he was going to have to haul it into the capsule so we could adjust the transponders. Of course they weren’t going to tell us what the satellite was for, but we all knew it wasn’t so you could get ESPN Deportes in Tuscaloosa. We also knew that Olaf was going to be doing some serious heavy lifting out there.

It took a while for Olaf to fit in, which is only natural. Me and the guys had been together in the trenches—literally—and you can’t help but bond when your tin rations run out, you’re waist-deep in God knows what kind of filth, and Jerry is pointing his .22 at you fifteen away across No Man’s Land. Jerry, our Jerry I mean, Jerry Rodriguez from San Antonio, that is, even took Olaf for a spy. “I no trust his accent,” he said to me at the NASA bar with the honesty that comes from one cerveza too many. But I think he just wanted to prove to the guys that he was as American as the rest of us, even though his father and father’s father was on the wrong side of the Alamo. Funny thing is Olaf thought Jerry was a spy, too, which he confessed to me over some Danish rum his mum had mailed him. Everything worked out okay, though. Jerry and Olaf got to be best of friends because they both loved Tom Clancy novels and suffered from mild schizophrenia that they covered up during their psych evaluation by pretending to be each other.

“Damn, captain, are they going to light this candle or not?” Chuck grumbled from the backseat. He was always in a hurry to get wherever he was going, which was funny because he was a doctor before he got drafted. “For a doctor, you sure don’t have any patience!” Harold joked for the millionth time, and we laughed not at the joke itself but the absurdity of its repetition. Plus, Harold and Chuck were lovers, which added a depth to the joke that only a military man can appreciate.

I called up the tower and said, “You’ve got five guys up here who are ready to get on with this mission. I don’t care if I have to steer this thing with a rudder, let’s launch.” Sometimes you had to kick those eggheads in the ass to get them to do anything. “No can do,” shot back Carol, exhaling her cigarette as she spoke like Marlene Dietrich. Now, if she was an egghead, she was a Faberge. (I was big into collecting those at the time.) Some of the guys didn’t like Carol because she was so pretty and was sleeping with Rodriguez. But she was top-notch in the control tower, and that’s all I cared about. Besides this was NASA, where everybody slept with everybody. We used to joke that the initials stood for National Aeronautics and a whole lot of interagency Sex Agency. That’s before the Moral Majority got interested in the space program.

“Roger that, Carol,” I said, knowing that if we weren’t lifting off now, we probably were going to be spending the night aboard the capsule because it was going to be dark in about 20 minutes. But just as I was ready to give up hope, the status light turned from red to green. I looked at Jerry, who knew all about the navigation systems, but he just shrugged. “What happened down there? We’ve got a ‘Go’ sign here,” I said to Carol. “Yeah, we’re not sure what happened,” she responded. “But the problem seems to have corrected itself. We’re going to start the countdown in a T-minus 30 seconds.” I looked around at my crew, who were busy putting away the condiments with the kind of no-nonsense professionalism that comes only with years of experience, and thought to myself with pride, “Yeah, the New Kids on the Block hit the nail right on the head.”

Email ThisBlogThis!Share to TwitterShare to FacebookShare to Pinterest
Labels: a little something, writing rules

Good writing. Thanks for distracting me for 5-6 minutes this morning.