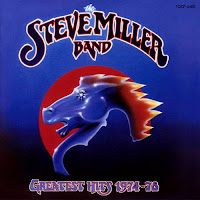 I'm going to get the guy who didn't find my Amazon.com review of "Steve Miller Band: Greatest Hits 1974–1978" helpful. I mean, I'm really going to get him. Eighteen people read my review, and seventeen found it helpful. Now you tell me if I've got a problem or that guy does. It's him, right? Well, now he's got another problem: I'm coming after him.

This guy is seriously dense if it doesn't help him to know that "Swingtown" builds a foundation of rhythm piece-by-piece, then adds contrapuntal layers of melody, and finally bursts into an understated chorus that is surprisingly effective. What does this guy want, anyway? He's probably just bummed that "Abracadabra" isn't included on the album. I admit that "Abracadabra" is a great song that had Miller furthering his visionary exploration of synthesizers that began with songs like "Fly Like an Eagle" and "Rockin' Me." But it came out after 1978! If you want "Abracadabra, get "Young Hearts: Greatest Hits" you moron.

By the way, jerk, "The Joker" is not about cards or Batman. It's an exploration of the divide between appearance and reality. It also deals with the decline of traditional ideas of masculinity in an increasingly yonic society. I mean doesn't he hear the guitar making that whistling noise? And can't he understand that "Take the Money and Run" is about the importance of personal responsibility in an era dominated by moral relativism? I tell you who did understand it: seventeen other people. So take that, jackass.

Hey, I don't even like Steve Miler that much. I'm much more of a Bob Seger guy. But I like to help people who don't know as much about music as I do. I guess some people just can't be helped. Anyway, when I find "justamusicfan," he's going to regret he ever read that "Wild Mountain Honey," while considered an afterthought by many, shows that Miller is in the same class of singer-songwriters that includes James Taylor and Jackson Browne.

Yeah, he's really going to regret that he ever read that.
Posted by Advanced Genius Theory at 3:27 PM

Email ThisBlogThis!Share to TwitterShare to FacebookShare to Pinterest
Labels: a little something, steve miller band

This post is singular...as in the singular most funny thing I have ever read.

Hey Jason, loved the book...just put up a small review of it over at my site, though you might be interested. Keep up the great work, it's brilliant!

Yeah, so maybe a link would help...http://thesmokingcupcake.com/about/june-2010-bookshelf/