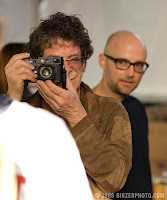 This person is not a fan of my book, writing:


Hartley states that most people think his theory is a joke, although he insists it isn’t. I can’t believe he is earnest. I have been a Dylan fan for as long as I can remember, and Reed’s work with the Velvet Underground is enough to put him in the pantheon of rock musicians. But, no matter what mental gymnastics you want to go through to prove otherwise, Dylan and Reed actually lost it. (Dylan, though, climbed out of his ’80s trough, beginning with 1989′s Oh Mercy.) Whether the issue was apathy, drug and alcohol abuse, or simply using up all their good ideas, many of the artists who made their names in the 1960s and early ’70s lost their way in the ’80s. And although Hartley equates the “advancement” of the ’80s with Dylan going electric in 1965, no artist of that generation released anything in the ’80s that matched his/her/their earlier output. Plus, Hartley instantly loses his argument by including Brian Wilson’s “Smart Girls” on his list of examples of Advancement in practice. By insisting that “Smart Girls” is anything but a crime against the hearing public, Hartley reveals that he is an irrational person.

That's fine. But now he's going after Lou Reed and his photography:


[Reed's] “horseshit-generating powers” have been pretty spectacular throughout his career, but since the early-’70s, he hasn’t done much of anything that warrants paying attention to his pompous pronouncements. And, being the driving force behind the Velvet Underground doesn’t earn you forty years of good will. At this point, I’m mostly just amused by how awesome he thinks he is and how seriously he takes himself.

I'm going to pretend to be rational for a moment: if my defense of "Smart Girls" shows that my theory is without merit, what are we to make of someone who makes a statement like, "since the early-’70s, he hasn’t done much of anything that warrants paying attention to his pompous pronouncements"? Not much since the early 1970s? Talk about pompous pronouncements! I guess all of us who like The Bells and New York and Magic and Loss and so on are just idiots. But not as big of an idiot of Lou Reed, of course, who has the audacity to show his photography in an exhibition and call one of his photos "Gorgon." Lucky for Reed the blogger does admit that the Velvet Underground was great. What a relief!
Posted by Advanced Genius Theory at 5:59 PM

There are so many reasons why that article is off the mark but to suggest Lou Reed has done nothing since the early 70s is ludicrous. Apart from the records you mentioned I was playing 'new sensations' on the weekend for the first time in a long time. I was surprised by just how much I enjoyed it.

The older we get, the more difficult it becomes to be spontaneously creative, as those in their mid-twenties can be. And, with the inevitable weathering of vocal abilities, initial hearings of "newer" material can be be a bit off-putting. There can be however, a deeper resonance that develops as the material presents itself far differently than youthful speed rock. I "get" little in-jokes from Reed albums of 5-10 years ago that have taken me that long to "get" (Mr. Lit Hip that I am). When re-listening to things like "Growing Up In Public" for the first time in 15 years, THAT sounds lyrically AND sonically righteous. One has to invest in the long haul career to see the rich tapestry. Just wait until 50 years from now when someone discovers it all for the first time, without the current era's shadings, like an ancient Robert Johnson record. Lou was always the quintessential loner-outsider. Understand me on my terms, or take a walk...I vote for Very Advanced.

Amen to you both.