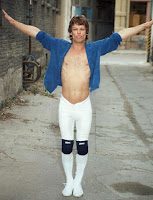 Mick Jagger is clearly Advanced, and were it not for his guiding hand, it’s easy to imagine the Rolling Stones being just another band that was good for a while, like the Animals or Ebn Ozn.

The case for his being a genius is airtight, so there’s no need to go over that. I think he began his move toward Advancement when the Stones started playing disco music. To clarify, I don’t really hear the disco in their disco songs, plus the songs were huge hits and very good, but still rock purists were pretty unhappy with the development. He embraced internationalism in the form of Bianca Jagger, he was in Freejack, he went solo, reunited with his band, sang with Bette Midler, appeared in a sitcom, sold out a million times over (starting in the sixties with a Rice Krispies commercial), and played the Super Bowl. And then there’s the matter of his look, which may be the most Advanced thing about him.

At various points he had the correct hair length, leather color, and sunglasses tint, but he developed a style of dress that no non-Advanced person could have ever dreamed up. I’m talking about the tights with knee pads, the jerseys, the striped leotards, and the puffy jackets that he has worn on stage the last 30 years or so. What is so baffling is that he was such a stylish dresser at the start of his career; no one has ever rocked sweaters and oxford shirts like he did (Eddie Haskell came close). But once the dress code was relaxed for rock musicians in the late 1960s, his Advancement blossomed. He lost the bad boy in nice clothes look, choosing instead a wardrobe that was a mixture of Gandalf and Philadelphia Eagles cheerleader. Even more amazing is that he dresses normal, even well, offstage. So what’s going on?

One thing about Advanced front men is that they cannot be embarrassed. They will sing in falsetto, sing with a pronounced southern accent even though they are from England, dance like a chicken, and do Inkspots-inspired voiceovers about fine Arab chargers. It is this fearlessness, though, that makes them able to give full voice to their genius. In the case of Jagger’s clothes and general onstage persona, it does seem ridiculous, but he is an incredibly effective performer. He comes from an era where entertainers took their jobs seriously, which included wearing clothes that separated them from the audience. Jagger certainly meets this objective. As I said before, he is the reason the Stones are still around, and a big part of that is because he is still so interesting to watch. Make fun of his clothes, his pointing, and his lip contortions all you want, but the guy gets the crowd worked up, even those who are sitting in the top row of a football stadium a half-mile from the stage. (I think he got into the garish costumes when they were playing in stadiums before the advent of Jumbotrons. It was just a way to be seen.)

Many Overt people feel like he shouldn’t be on the stage anymore, regardless of his clothes. They say that Jagger and the Stones tour only for the money and their recent records are just irrelevant throwaways. This is ridiculous, as they certainly have more money than they could possibly need, and it would keep pouring in whether they were touring or not. They tour because they love playing live, and all the musicians they worshipped played until they couldn’t play any more. If they didn’t like it, they wouldn’t do it. As for the records, it is extremely difficult and time consuming to make a record, and they really don’t make that much money for an artist. Sure the records since Steel Wheels are hard to get into right away because they don’t sound like the old Stones, just as it is difficult to enjoy any new music put out by a musician whose “prime” has passed. But if you haven’t listened to Voodoo Lounge as many times and with as much care (or drugs) as you did Exile on Main Street, how do you really know it’s not as good? You may dismiss this idea, but you probably also dismissed Voodoo Lounge before you even heard it. There aren’t that many musicians as Advanced as Mick Jagger, so you could only benefit from giving him the benefit of the doubt. Maybe you’ve been hoping that there would be another great Stones record some day, so wouldn’t it be great if it’s already on your iPod?
Posted by Advanced Genius Theory at 9:15 AM

Just thought you needed to see this Lou Reed photo at
Rolling Stone
Enjoying the book, glad Alice Cooper is in the conversation. I'm currently listening to the CD reissue of Zipper Catches Skin and 28 years later it's starting to make sense.