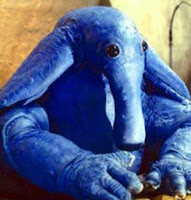 Had a great conversation with a guy named Ben Allen, who has known about the theory for a while and was kind enough to get me a little press. Read the bit below, then see the whole thing here so the picture of the blue elephant makes sense.


Ever wondered how Lou Reed could release a double album of nothing but guitar noise and feedback and still have it advance his career? “What the hell was Bob Dylan thinking doing a television spot for Victoria's Secret?” Or, “what would motivate Brian Wilson to release a rap song entitled ‘Smart Girls’ in the late 80’s?”

Your immediate reaction might be something like "most artists occasionally create work that sucks, and don't always make the best decisions." I too, felt this way for many years.

Now what would you say if I told you there was a theory that would allow you to appreciate all of the work by your favorite artists? Twenty years ago, Jason Hartley came up with one.

In 1990, he and a friend developed The Theory while dining at a Pizza Hut. Although he has been writing and talking about it for years, he gained an increased level of exposure when Chuck Klosterman published an article attempting to explain The Theory in Esquire Magazine in 2004.

Recently, Simon & Schuster published Hartley's first book, The Advanced Genius Theory: Are They Out of Their Minds or Ahead of Their Time? I spoke with Hartley to help explain further what all this means and if The Theory is for real.

Advanced, ManNadaMucho.com: See if you can explain Advancement Theory in 30 words or less. Go.
Jason Hartley: There are certain artists who are so good, for so long, that it is foolish to dismiss them, no matter how out of touch, ridiculous, or crazy they may seem.

NM: That was exactly 30 words, nice work!
JH: I’ve been talking about it for almost 20 years, so I’ve had a lot of practice.

NM: Don't you think it's possible that even geniuses create subpar work on occasion? What about when they retrospectively declare their previous efforts as "garbage?"
JH: First of all, never trust a genius, especially an Advanced Genius, when they talk about themselves. Not only do they lie all the time, they also judge from their own Advanced perspective. That’s why they talk disparagingly about their work (except for their latest work, which they inevitably describe as the best they’ve ever done).

Answering the first half of your question second, yes, it is possible for geniuses to create subpar work. But “subpar work” by Advanced Geniuses is more interesting than other artists’ well-received output. Of course, the trick is identifying when an Advanced Artist does actual subpar work. But that’s hard because we are so behind them in terms of our ability to understand their work. Ten years ago, no one would have argued with you if you said that Lou Reed’s Metal Machine Music was worthless, but now people are starting to get the hang of what he was doing. So maybe the Advanced never do subpar work. I guess the point is that I don’t think many of us are in a position to judge.

NM: Isn’t a little pretentious to explain music being brilliant just because the general public isn’t smart enough to understand it?
JH: Only slightly less pretentious than dismissing an album by Bob Dylan.

One confession: I sort of cheated on the 30-word bit.
Posted by Advanced Genius Theory at 1:19 PM

How did you cheat on the 30 word bit?

I counted before sending so it would be just perfect. Sounds like it came right out of my head, though, doesn't it?