Are Magazine Covers "Worse" Now? It's JFK vs. Amy Schumer

boingboing has a link to a piece in Medium called The Evolution of Magazine Covers ("A look at how we've changed in the past 100 years"). In the original piece you'll find this sort of thing:


Cosmopolitan covers started out with women dressed conservatively. Then they started showing some skin. Then more skin. Finally, they started posing in sexy positions. As women have earned more rights throughout the years, they’ve also earned the right to wear whatever they damn well please. Or maybe that just sells more magazines?


The Seventeen logo has stayed the same, but almost everything else about the design has changed. There was a time when the cover was delightfully simple. Then things just got more and more cluttered. The magazine cover’s job is to sell the magazine — it has to stand out in a rack full of other magazines. So the design starts to get louder and louder.

And about the GQ covers comparing JFK in 1962 to Amy Schumer's Star Wars cover from earlier this year (see below), the comment is:


“Hey, we can sell more magazines with women in bikinis instead!”

The writer at boingboing, David Pescovitz, says, "I don't like the old ones because they're old, I like them because they're better." That statement is hardly believable. How does he know that's why he prefers one to the other? The JFK cover seems bland to me (the Great Man at his desk), and the text that accompanies it is "new fashion frontier in the American manner." So a boring picture of a president and an article about fashion using a cliche ("new frontier") is better than a memorable image of one of the funniest comedians working today subverting not only the world's most popular movie but also the idea of women appearing in bikinis on the cover of men's magazines. (I don't know how successful she is at getting her message across, but it's certainly more interesting than a man standing at a desk.) But that has nothing to do with nostalgia? I don't buy it.

But speaking of buying, the writer at Medium was exactly right about what covers are supposed to do: attract attention on the newsstand and sell magazines. Occasionally you hit on a great cover (like Caitlyn Jenner for Vanity Fair) that not only sells magazines but is art as well. That has always been the case, though, as you can find plenty of terrible magazine covers in any Golden Era. 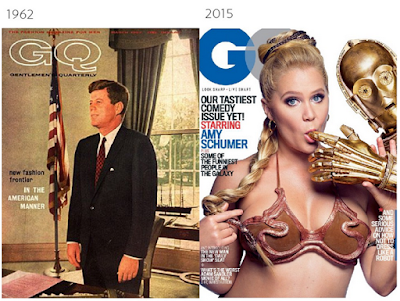