No, Banksy Is Not Advanced (Yet)

Everyone is loving on  Banksy for his Dismaland "bemusement park," and probably for good reason. Almost everyone I went to college with had an idea like this (maybe even exactly this, it's so hard remember), but none of us got it together to actually do it, so while the idea itself is so-so funny (Disneyland is an easy target), the execution of it is good. It also sounds like it came about, at least partially, because he has an affection for the location: "I loved the Tropicana as a kid, so getting to throw these doors open again is a real honour." But still, it's Overt because the idea is just the opposite of something (bemusement, not amusement, get it?), which is not Advanced. Banksy is not even an Advanced Irritant because people are so delighted with the work.

I have to confess to an Overt dislike of Banksy, but it could very well be because the name irritates me. My attitude is changing, so maybe he was just ahead of my time and he will Advance one day. 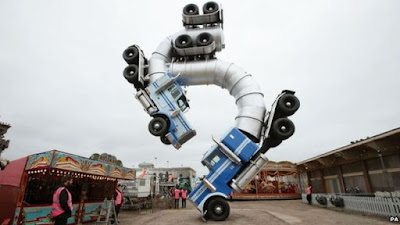 I believe Mr. Brainwash in the obvious candidate for Advancement.