Jeff Tweedy on Dylan and the Asshole Side of the Spectrum

I came across this article in Rolling Stone in which Jeff Tweedy had this to say about Bob Dylan (Wilco toured with him a while back):

JT: We've talked a little bit, and I actually get a really warm feeling from him. I felt very inspired just being in the presence of somebody that has that few fucks to give about anything. There's a lot of middle ground there between somebody like Bob Dylan and Paul McCartney, who totally gives it up every night for the people and the songs. But if I had to choose one to be more inspired by, it's definitely on the more curmudgeonly asshole side of the spectrum.

RS: It can be frustrating, though, if you go and see him on an off night.
JT: I would think that he would think that you're just frustrating [laughs]. It's really what you bring to it — you're bringing all of his other records and what you want him to do, and he's bringing his passion for jump blues right now. He's bringing his newest sets of fucking impeccably crafted lyrics, which are really astonishing. I don't think people appreciate it, you know? He's just curious. He's just really still pushing and curious and, you know, people mistake [that] for phoning in and being withholding. I think it's just the way he's lived.

This is an important point about Advanced Artists. We really don't know what motivates them, and while lesser artists will try to explain it to their audience, the Advanced just don't care. So we end up frustrated, and then take out that frustration on the artist (but they still don't care). Paul McCartney gives it up in concert, sure, but he has always done exactly what he wanted on his records without apology. Two different styles of endless curiosity, but a similar result: confused and often disappointed fans. 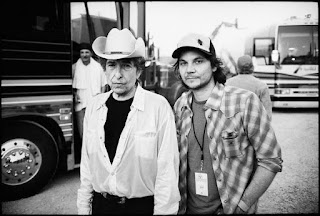