Yes, Jon Stewart Qualifies for Advancement (And Hosting the SummerSlam Event Is a Great Start)

Jon Stewart's decision to be a part of SummerSlam reminds me of a joke from an old SNL skit. Norm Macdonald played Burt Reynolds, who was coming off the success of "Boogie Nights." He was on the Barbara Walters (Cheri Oteri) show, and she says, "One thing's for sure, after your critically acclaimed performance in 'Boogie Nights,' directors from Gus Van Sant to Quentin Tarantino will be banging down your door. Burt, what's your next project?" His response is: "I'm doing a, ah, car picture with Dom DeLuise. Funny guy."

Stewart is one of the most powerful men in America (sure, why not), and he follows up the "Daily Show" with SummerSlam. Not only is this awesome, but it is perfectly in keeping with the Advanced tradition. The Advanced love wrestling. A lot. 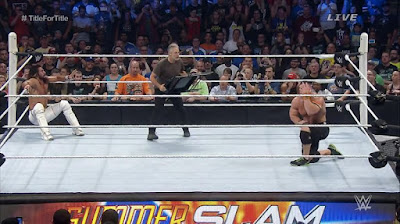 Posted by Advanced Genius Theory at 9:46 AM