Marlon Brando Wanted to Play a Dolphin in the Island of Dr. Moreau, But I Ain't Mad At Him

I just got around to watching Lost Soul: The Doomed Journey of Richard Stanley's Island of Dr. Moreau last  night. As you might expect of documentary about the making of a movie starring Val Kilmer and Marlon Brando, Advancement was rampant. But was there "madness" as the headline for this article says? Let's see what happened...

Richard Stanley had had some success in a couple of small movies (Hardware and Dust Devil) and had an idea to make a version of H.G. Wells' The Island of Doctor Moreau. Stanley, is should be said, is quite an Overt weirdo, and I mean that in the best sense. For instance, he may have relied on witchcraft to convince Brando to sign on and later, after he was fired, he disappeared into the countryside only to come back as an extra in the movie (he was in a beast mask). Delightful! He also seems to have been quite the pothead, but there's Overtness for you.

Anyway, he lost control of the film for a lot of reasons, but it seems like he just wasn't prepared to direct a movie with a huge budget with big stars. Also, he wouldn't leave his house to go to meetings, but that's just another fun quirk. The movie is falling apart and Brando's daughter killed herself, so he left to deal with that, which means he couldn't protect Stanley. They fire Stanley and bring in John Frankenheimer, who had a reputation as someone who could handle big egos. He also yelled a lot because that's what "old school" directors did. This is where things get interesting in terms of Brando:


Finally, Brando arrived on set, and filming recommenced … after a fashion. From that point on, a typical working day ran as follows. Brando would arrive at 9am or thereabouts and go directly to his trailer. Frankenheimer would follow, and the pair would discuss the film in private. Around an hour before lunch, the duo would emerge and tour the set, while Brando suggested various ideas he’d had for the general improvement of the movie, and the script would be rewritten to accommodate.

Okay, that's not that unusual. Stanley's script was being rewritten anyway, so you could see this being necessary. Only...


Some [ideas] that made it into the finished film include: Moreau covering his face in thick white make-up outdoors, Moreau occasionally wearing an ice bucket on his head, and Moreau never appearing without an identically dressed midget – the original Mini-Me, right down to the tiny grand piano – after Brando took a shine to a two-foot-tall actor in the supporting cast. One of the few Brando brainwaves that did not end up on screen was the actor’s suggestion that Moreau would wear an elaborate hat throughout the film. In the final scene, this would be removed – revealing him, in a dramatic twist, to have been a dolphin all along.

Madness! But maybe not. Fairuza Balk says in the documentary that she approached Brando about how their characters should interact. He told her something like, "Darling, no one is going to watch the movie, so just relax and have a good time. Don't worry about it." There are two possibilities here (as I see it): one, he was trying to get a young actress to relax because he knew she was nervous to work with him. The other is that he knew that the movie wasn't working and his advice was perfect. Or maybe a combination of the two.

Let's assume that the second explanation is true and he knew the movie was a lost cause. What were his options? Soldier on and make a middling movie that no one would ever remember or do what he could to make the movie at least interesting. The latter is the Advanced move because mediocre is safe, and the Advanced are rarely safe.

The point I'm trying to make, again, is that what often looks crazy or lazy or easy, is really just an artist making a decision (unless they are on drugs or mentally ill). If you decide to focus on the oddness of the decision, it's easy to dismiss whether it was a good idea. The "mini me" approach was successful, in my opinion, because it created some of the most memorable scenes in any movie I can recall. As for the dolphin, my guess is that he wasn't talking about turning into Flipper, but perhaps some kind of human-dolphin hybrid, which wouldn't have been that far out considering the movie was filled with mutants. Or he was just saying something completely ludicrous to make it easier to convince the director to let him use the ice-bucket bit. It's very easy just to laugh at Marlon Brando's eccentricity and say he was just a crazy former genius, and the documentary certainly plays up that element. But it seems worthwhile to at least entertain the notion that he knew exactly what he was doing and achieved exactly what he hoped for. After all, no one would be talking about this movie all the years later if the part would have been played by someone who never would have though of playing a dolphin, say, Dolph Sweet.

I recommend the documentary, even if you just want to think Brando was nuts and Kilmer was an asshole. 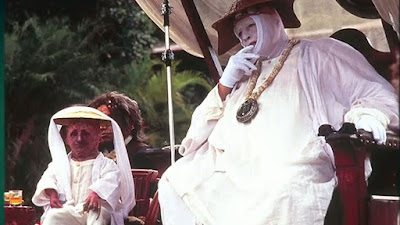 
I am Mariam,from what I can read. It has been sad news and scam to everyone about Voodoo casters or so. But to me they are so real cause one worked for me not quite two weeks.i met this man on a blog his name is Dr Abalaka is a very powerful man.I traveled down to where his shrine his and we both did the ritual and sacrifice.he had no website site, and now me and my ex are living very ok now.I don't know about you but Voodoo is real;love marriage,finance, job promotion ,lottery Voodoo,poker voodoo,golf Voodoo,Law & Court case Spells,money voodoo,weigh loss voodoo,diabetic voodoo,hypertensive voodoo,high cholesterol voodoo,Trouble in marriage,Barrenness(need a child),Luck, Money Spells,it's all he does. I used my money to purchase everything he used he never collected a dime from. He told me I can repay him anytime with anything from my heart. Now I don't know how to do that. If you can help or you need his help write him on (dr.abalaka@outlook.com) i believe that your story will change for better,or if you have any question you can contact me here as mariambaurice@gmail.com also his facebook link https://www.facebook.com/profile.php?id=100014833723968 Thank you.