No, Snoopy Did Not Kill Peanuts

I came across an article called How Snoopy Killed Peanuts. It is the essence of overtness. Let's take it blow by blow. The article starts like this:


By the end of its run in 1999, Peanuts was an institution. It had become an omnipresent part of American culture, and that’s not a compliment. The general response to reading the average Peanuts strip in the 80s and 90s was a ‘meh’ half-smile — a snicker, maybe, but never a full-blown laugh.

Is the second part supposed to be some sort of proof of the assertion that being "an omnipresent part of American culture" should not be considered a compliment? I can't tell, but my guess is that the writer just wants to use the familiar argument that ubiquity is proof of mediocrity, and then follow it up with another assertion about the "general response" being a half smile. Is it the writer's own general response or the response of the general reader? If the former, are we to believe that the writer read Peanuts cartoons every morning and said, "meh" (generally)? If the latter, are we to believe he has done some sort of survey of readers? Not sure. Let's move on.


Perhaps Bill Watterson, creator of Calvin & Hobbes, had the right idea. He stopped working on his strip after only 10 years — a fifth of the time that Schulz spent working on his — and he never licensed his characters. Because as legendary as Peanuts is, it was only ‘great’ for a 15-20 year period — from about the mid-50s to the early 70s. And even by the 70s, there was a slow, but definite drop-off in quality. By the 80s, with the exception of a few notable storylines, the strip was essentially dead. The 90s was just more of the same.

Ah, yes, the "quit while you're ahead" idea. It's odd to say that an artist should stop creating out of fear that they might not be able to produce great work when it is fearlessness (coupled with talent and vision) that leads to the great work in the first place. And of course licensing one's characters is a terrible thing because it makes a few people unhappy and millions (billions?) of people very happy. I know my daughter looks at her snoopy doll with contempt when she cuddles it at night. My son can barely to manage to read his stack of Peanuts books out of disappointment that Charles Schulz sold out. And the idea that 15 to 20 years of greatness merits the word "only" goes to show you that there really is no pleasing some people. So the writer has 20 years of greatness, and he is complaining that the person who gave him that gift had the audacity to change his comic strip based on his own tastes and make money off his creation (much of which goes to various charities). And then to say that "the 90s was just more of the same" is not exactly enlightening, even though the writer says the decline was "definite." Still, let's hear more if see if we can pinpoint where it all went wrong.


And unfortunately, much of the blame for this can be traced back to Snoopy, the most beloved of Schulz’s creations. As the strip progressed, the beagle hogged more and more of the spotlight in increasingly negative ways. And the intelligence and darkness of the strip, which once made it so distinctive on the comics landscape, was replaced by more mainstream, cutesy humor.

I do wonder if the writer is aware that Snoopy was a character drawn by an artist making a conscious decision to pursue characters he finds most interesting and not an actor looking for a bigger part.


Now, granted: the earlier years of the strip had plenty of easy, cutesy humor — Schroeder, Linus, and Lucy were toddlers and infants at the beginning of the strip’s run, instead of the seven and eight-year-olds they would eventually become. But it was still expressive humor — Schulz played around with facial expressions and wordless punchlines to hilarious effect.

So this is the classic Overt Critic trap. The earlier stuff was also easy and cutesy, but it was a kind the writer likes, therefore it was better.


Schulz started repeating some earlier jokes, but in their retelling, he gave them additional depth and subtlety In this case, then, more of the same is good!

On to our villain, Snoopy…


Snoopy began the strip as a normal dog, and the majority of his gags were of him doing traditional dog stuff. But a couple of years in, Schulz figured out how to characterize Snoopy; he was a dog who resented being a dog. So, Snoopy spent most of his time trying on other identities — usually those of other animals, and occasionally those of humans.

I always thought Snoopy was fine with being a dog, proud even, he just had a big imagination and never let his dogness get in the way of doing things he wanted. He also served a Kramer-like role in that he was not constrained by conventions that keep most people from doing the things we really want, and we got to enjoy that freedom vicariously. Of course that it takes a possibly delusional dog to make us experience the joys of freedom is just the usual easy, cutesy late-era Peanuts.


Failure was the key to Snoopy’s charm….


But near the end of the 60s and well into the 70s, the cracks started to show. Snoopy began walking on his hind legs and using his hands, and that was the beginning of the end for the strip. Perhaps he was technically still a dog, but in a very substantial way, Snoopy had overcome the principal struggle of his existence. His opposable thumbs and upward positioning meant that for all intents and purposes, he was now a human in a dog costume.

This is actually a good point. It does seem to me that it's a form of cheating when an artist starts to change his characters' essence to supply new storylines.


It was just a series of Snoopy in new costumes, almost as if Schulz was anticipating merchandise demands.

So much for the good point.


Cuteness had replaced depth in a strip that had always celebrated the maturity and adult-like nature of precocious children. And since the strip had become globally, universally loved, there was little impetus to revisit the darker social commentary of years past.

Does the author know what impetus there was in the beginning of the strip to visit dark social commentary? Does he know why the strip steered away from that (or give us any proof that it was any less dark than before)? We can't tell from this article, and that is pretty important given that the writer talks a lot about Shulz's motivations, including accusing him of whoring out his art for merchandising royalties.


Snoopy even passed for a human in many circumstances — Peppermint Patty referred to him as the “funny-looking kid with a big nose”… thus, the ‘humanizing’ of Snoopy also meant that the real kids were used less and less.

Oh, please. Marcie calls Peppermint Patty "sir," but that doesn't allow Patty to be a boy. Patty mistaking Snoopy for a kid was just one of the thousands of quirky things Schulz decided to do for his own reasons (and I couldn't pretend to know what they were).


By the end of the strip’s run, the artwork had also started suffering. Sometimes, due to poor health and unsteady hands, the lines were no longer clean. Schulz stopped detailing the characters’ facial expressions, and they all took on a bland, monotone sameness — but then again, most of the characters were subdued versions of their former selves, and rarely projected emotions with their words either.

Okay, this article is about how Snoopy killed Peanuts, so why talk about how old age and illness resulted in inferior artistry? Also, the strip he chose to illustrate this is actually funny to me.


Occasionally, Schulz threw us some abstract thoughts and reflections, but they were neither fleshed out nor followed up on — they seemed like random, depressed musings, rather than fully-formed jokes or insights. Per usual, Snoopy (and now, multiple members of his family) dominated the strip to its detriment. And look at all those ellipses

Earlier the writer thought the early Peanuts was great because he brought darkness to the comics section, but I guess in later years it was too dark. Again, his examples of the decline are funny to me. So why are we even having this discussion?


Yes, the movie will make a lot of money.


And yes, it will likely put Charlie Brown and his friends back on the pop culture landscape, at least temporarily. But to be truly successful, it needs to have the thoughtfulness and sincerity that these characters were originally imbued with. Less Woodstock, more Linus. Less Snoopy, more Marcie. It needs to have a little darkness and a little sadness to balance with the silliness. Because as Schulz proved over 60 years ago, it’s the combination that will make the audiences laugh — and cry — even harder.

I think this guy loves Peanuts, just like I do. When I was a kid, I wanted to take over for Schulz when he retired, even though I was unknowingly enjoying the inferior version. The earlier stuff is great in a certain way, the middle stuff is great in a different way, and the later periods are great in yet another way. My suspicion is that the version you started out with colors your perception of which version is best, just like people who discovered R.E.M. when "Losing My Religion" came out probably think that was their best period, while people who discovered them via the Hib-Tone single think those people are nuts.

The reason I love Advancement is that it has allowed me not to judge artists too harshly for making decisions I wouldn't have made or think less of the fans who approve of those decisions. Enjoyment is always good, even if it is "cheap" or "easy." It would have been impossible for Schulz to write a strip as long as he did without evolving, and, as a consequence, disappointing some who liked the strip for what it was originally. Well, not impossible, but if he hadn't there would be an article about Peanuts complaining that it was all more of the same, and why didn't he develop that dog more? 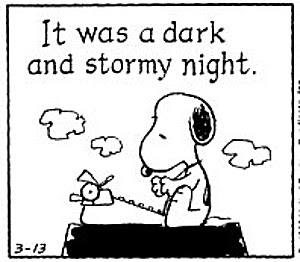 Update: Now the same guy is telling Pixar how to make a better movie!
Posted by Advanced Genius Theory at 3:23 PM