Napster Didn't Make Metallica (or You) Poor, and Other Things You May Not Have Guessed About the Digital Economy

There is an interesting article in the NY Times Magazine that is relevant to us. It's called The Creative Apocalypse That Wasn't. The gist of it is that Napster and things like Napster, were supposed to kill the music industry and, more generally, "In the digital economy, it was supposed to be impossible to make money by making art." But that hasn't happened for a variety of reasons, some of which were not on anyone's radar at the time. Here are some good bits:


The problem with the culture industry is no longer its rapacious pursuit of consumer dollars. The problem with the culture industry is that it’s not profitable enough. Thanks to its legal troubles, Napster itself ended up being much less important as a business than as an omen, a preview of coming destructions. Its short, troubled life signaled a fundamental rearrangement in the way we discover, consume and (most importantly) pay for creative work. In the 15 years since [Napster hearings, for which Lars Ulrich gave testimony], many artists and commentators have come to believe that Ulrich’s promised apocalypse is now upon us — that the digital economy, in which information not only wants to be free but for all practical purposes is free, ultimately means that ‘‘the diverse voices of the artists will disappear,’’ because musicians and writers and filmmakers can no longer make a living.

The trouble with this argument is that it has been based largely on anecdote, on depressing stories about moderately successful bands that are still sharing an apartment or filmmakers who can’t get their pictures made because they refuse to pander to a teenage sensibility. When we do see hard data about the state of the culture business, it usually tracks broad industry trends or the successes and failures of individual entertainment companies. That data isn’t entirely irrelevant, of course; it’s useful to know whether the music industry is making more or less money than it did before Ulrich delivered his anti-­Napster testimony. But ultimately, those statistics only hint at the most important question. The dystopian scenario, after all, isn’t about the death of the record business or Hollywood; it’s about the death of music or movies. As a society, what we most want to ensure is that the artists can prosper — not the record labels or studios or publishing conglomerates, but the writers, musicians, directors and actors themselves.

It turns out that...Napster did pose a grave threat to the economic value that consumers placed on recorded music. And yet the creative apocalypse he warned of has failed to arrive. Writers, performers, directors and even musicians report their economic fortunes to be similar to those of their counterparts 15 years ago, and in many cases they have improved. Against all odds, the voices of the artists seem to be louder than ever.

What follows all that is a bunch of data and talk about how different industries have fared. It seems like the music business has suffered, but not when it comes to performances, and that business was always kind of awful. Movies, TV, and books are all in good shape. ("But contrary to all expectations, these stores have been thriving. After hitting a low in 2007, decimated not only by the Internet but also by the rise of big-box chains like Borders and Barnes & Noble, indie bookstores have been growing at a steady clip, with their number up 35 percent (from 1,651 in 2009 to 2,227 in 2015); by many reports, 2014 was their most financially successful year in recent memory.")

I love this article because it doesn't take what seems intuitive (if content is free, artists can't make a living) as the truth. It seems like every time something new comes around, someone can only see it as the death of the old thing. In the last few years, I've tried to read books by economists, engineers, and mathematicians because they see the world in a very different way than artists. Ironically, they seem to be far more adaptable to changes than artists because they are grounded in universal principles that aren't subject to trends or fads. Linear algebra isn't going anywhere, but if you are in the Soul Stirrers, Little Richard is going to seem like a sign of End Times.

The Advanced are never sentimental about the way things used to be, which is why they embrace technology as they do. In a way this is maybe self-defense--if you don't stay current, you seem old-fashioned--plus replacing sentimentality with novelty. Yet I think it is more likely the result of experience--they killed some old way of doing things, after all, and thrived. It's similar to how an economist will be fine with robots taking over Mel's Diner because they know that someone has to build the robot and that's probably a better job than taking orders and getting yelled at.

One thing will never change: making a living as an artist is next to impossible. The digital revolution hasn't changed that, it's just given us new excuses why we have to have a day job. 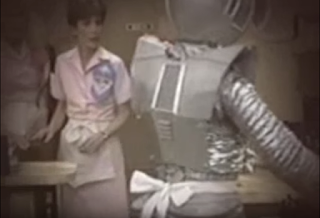