Lou Reed: Wighting for the Man 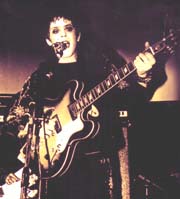 I've seen a couple more stories about the Isle of Wight concert, and I think that Lou Reed's performance might have been a little more interesting (and Advanced) than the article in NME suggested. It's been called bizarre and disappointing, and there was also this: "...the most anticipated star was Lou Reed who played as unpredictable a set as you'd expect, frequently deviating into experimental jams, sandwiched between classics such as 'Waiting for my Man' and 'White Light/ White Heat.'" Now I really wish I had been there. Anyway, it sounds like he's mixing up his set from the show I saw last year, which is great news. Could a new phase in his Advancement be on the way? We can only hope.

If anyone saw the concert, please feel free to send me your take.
Posted by Advanced Genius Theory at 12:05 PM