Meat Loaf Suing Jim Steinman to Use Own Album Title 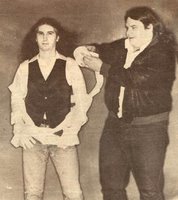 Meat Loaf is suing Jim Steinman and his manager, David Sononberg, so he can use "Bat Out of Hell" in his next release, Bat Out of Hell III: The Monster is Loose, which is the third installment of the Bat Out of Hell trilogy. Here's the story, according to a press release:

In 1995, without even consulting Meat Loaf, Steinman filed for a U.S. trademark for the phrase, "Bat Out Of Hell" despite the fact that Meat Loaf had used the "Bat Out of Hell" mark continuously and extensively since 1977. In the application process, Steinman represented to the Patent Trademark Office that he had the exclusive right to the mark and that nobody else used the name – a blatantly false assertion since Meat Loaf for many years before and after 1995 has had sole and exclusive use of the name.

Meat Loaf's attorney, Los Angeles trial lawyer Skip Miller said, "The law protects the user of the mark, and here there is only one user: Meat Loaf. We were forced to file suit to uphold these rights." When plans began to conceptualize "Bat Out of Hell III", Steinman was offered a position as producer as well as songwriter. Says "Bat Out of Hell III" executive producer Winston Simone, "Along with Jim's lawyer, we had negotiated by far the best producer agreement that we had ever seen. Unfortunately, Jim decided not to sign the agreement or accept the very substantial advance."

Steinman voluntarily removed himself from the making of "Bat Out of Hell III – the Monster is Loose." Since then, Steinman, his manager and lawyer, have approached Meat Loaf's labels, Universal and Virgin, falsely asserting trademark ownership and threatening litigation. According to attorney Miller, "Meat Loaf will not be bullied by anyone. He will continue to use the title "Bat Out of Hell" in any way he wants."

Meat Loaf has made every effort to bring Steinman into the creation of "Bat Out of Hell III – The Monster is Loose." Album producer Desmond Child stated "Meat Loaf wanted to include Jim in making this record. His songwriting is part of the Bat Out of Hell legacy. Ultimately, we had to acquire the rights to use six of his songs directly from the publisher in order to involve him in this album."